Connecting the dots. Not... 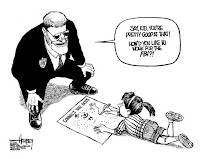 Malcolm Gladwell writes in 2003 of the difficulty of connecting the dots in potential terrorism cases.
(Cartoon courtesy Appraise News )
(Hat-tip to PS for link to Gladwell)
It’s a kind of excuse a mea non culpa, if one slips through, as did Abdulmutallab.  In the case of Abdul though, I’d beg to differ.  I was in intelligence assessment in the eighties and we had well honed systems for bouncing up to our eyes items of importance from the vast sludge that flowed over our desks.  How much more should that capacity be decades later?  Moreover, Abdul signaled his intentions in so many different ways that there’s really no case for not having stopped him flying.
Once again: why can’t we have all the people on the much larger “persons of interest list”, one of some half million, put on the no-fly list.  Suspicion should be enough.  There’s no Allah-given right to fly.