The case against Keith Ellison 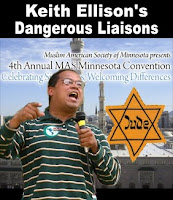 The case against Keith Ellison:

This post is based on Lucy Ash’s interview of Keith Ellison (D, Minnesota), America’s first Muslim Congressman, on BBC Outlook, on 13 November 2010.
At 4minutes 30s Ash says, about Islam:
“So you felt it was a religion that promoted, wholeheartedly, social justice.”
“Absolutely,” says Ellison (or “Keith” to the giggly in-awe Lucy), rather taken with such an overly flattering formulation that even he hadn’t dared to voice.  (Did he feel he might have been gilding a rather limp lily?).
Goodness me, talk about putting words into the interviewee’s mouth!
What are the words with which the young and giggly Lucy did not think to question Ellison?  Why did she not ask him about:

The prayer sessions he has held in Congress attended by at least nine people associated with terror groups.
His trip to Mecca to carry out the Hajj in 2008, that was paid for by the Muslim American Society, payment that was only revealed after media pressure. The MAS is the Muslim Brotherhood in the United States and we know that the Brotherhood is committed to the overthrow of the infidel government of the United States.
His support of White House adviser and representative to the Organisation of the Islamic Conference, Richard Hussain, who he described as “squeaky clean”.  But Hussain had backed Sami al-Arian a supporter of the Palestinian Islamic Jihad, and suggested in 2004 that the prosecution of home-grown Islamic terrorists was “politically motivated”.
His proposal that the US join the OIC, the organisation that is working through the United Nations to restrict freedom of speech, via laws to prohibit criticism of religion, with specific reference to Islam -- in short, to criminalise criticism of Islam.
His speeches at Council on American Islamic Relations events, even after the FBI had cut off any association with CAIR because of its ties to terrorist organisations, especially Hamas.
His understanding of the oath of office he took on the Koran owned by Thomas Jefferson, leaving us to infer that Jefferson was interested in Islam as the Religion of Peace.  In fact, as Christopher Hitchens shows, Jefferson was studying the core document of Islam in order to understand the ideology and motivations of the Barbary pirates, against whom the United States was about to engage in war.   If Jefferson were today waging the war against the Muslim states of North Africa that he was then, he would no doubt be labeled an “infidel invader” and heartless killer of civilian Muslims.

On Ellison's support for the vile hatemongering anti-semite Louis Farrakhan, she let Ellison get away with the excuse that it was just some youthful indiscretion, and then -- blasphemy! -- to make a moral equivalence argument, to compare Farrakhan to Martin Luther King.  King was called a "liar" by J. Edgar Hoover of the FBI, you see, so we are invited to infer that the opprobrium heaped on Farrakhan is an equivalent calumny....

Wake up, Lucy!
Postscript: letter to Outlook:
Lucy Ash's interview of Mr Ellison was a rather shocking example of overawed naïveté, from her rather-too-familiar introduction of "Keith"' to her placing into his mouth fawningly fatuous flattery of Islam:  "so, you felt it promoted wholeheartedly social justice".  "Absolutely!" says "Keith", hardly able to believe his ears, (and not having uttered anything like those words...).

Why did she not ask him some tough questions?  He's got form, has our Keef [link to this post].


Later: Lucy Ash wrote to me herself, in defence of her interview, while conceding on some issues.  Unfortunately, I didn't keep a copy of her email and some part of my software has deleted the email.  But I guess I touched a nerve...
- November 15, 2010