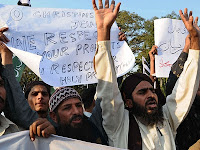 The article below from today's South China Morning Post reveals something about two issues in Islam: the difficulty of reform and the size of "fundamentalist" (or "hardline" or "extremist", or just plain "pious", take your pick) groups in Islam.
[photo: SCMP]


"... hard-line Islamic groups in Pakistan have pushed back and some have even threatened officials in the past who suggested reforming or repealing the blasphemy law. These groups have significant power since politicians from the major parties rely on them for votes." [my emphasis]

There it is in one sentence: the difficulty "moderate Muslims" have in getting any reform of Islam.  And remember: this is about KILLING a woman who got into an argument that started over a disputed water-bowl, for heaven's sake!  Presumably she said a few things about "the prophet" in the exchange.  And still, there's difficulty in getting any change in the blasphemy law: the Movement for Protection of the Prophet's Honour has vowed to "oppose any change in the blasphemy law".  And the second point: the groups have "significant power".  Of course, that's Pakistan.  But the same is true in any Muslim community.  Those that hew closely to the tenets of Islam -- and its inherent violence -- are the ones with "significant power".  That's the case in the UK, in Europe, in the US, in Australia.