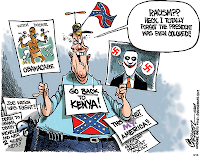 I hadn’t realised till recently just how kooky is the right in America.  Sure, there’s Sarah Palin, who would make foreign policy from her patio (“I can see Russia from my backyard”).  And then the fruity Tea Baggers, sure.  But just how nutty were they?  Just constitutional troofers?
I’ve just read “Confounding Fathers” in last week’s New Yorker Magazine (Oct 18) which is an eye-opener.  There’s Glenn Beck, a founder Tea Bag, who recently converted to Mormonism.  That’s puzzling. I can understand how someone brought up in Utah in a Mormon household would be a Mormon.  But convert?
Conversion, as an adult, means you’ve read the Book of Mormon and you’ve said to yourself, “yup, that makes sense – you go to heaven on the planet Smith, you can shake hands with God if you know the secret handshake and are wearing the secret underpants,  the biblical Jews made it to the US via Alaska, where they devolved into native Americans – YES, that all makes sense!  That’s the religion for me!”.
Beck and his fellow Baggers believe that the founding fathers of the US drew on the Torah for the constitution (they did not), that they did not believe in the separation of church and state (they did), that the John Birchers were on to something, with their racist fundamentalism.
One of the winners in the current Congressional elections, Rand Paul (son of Ron Paul, name a tribute to Ayn Rand) was on BBC this morning.:  “Jefferson said ‘the government is best that governs least’”.   But what the Baggers really believe is that the government governs best is the one that doesn’t govern at all.  Government is all bad, in their view, forget Medicare, the rule of law, policing, defense, education, and regulation.  They want to do away with all that, or to privatise it.
This brought to mind my discomfort, earlier on in my critiques of Islam, that most of that critique seemed to be on the political Right.   And I didn’t feel comfortable there, for all that some (many?) of my mates and rellies think I’ve gone over to the dark side. After all, in an American context, I’d be dangerously liberal: believing in abortion rights, gun control, anti-Iraq war, action on climate, and so on.
The Right seems to have hijacked the critique of Islam, and that makes it somewhat embarrassing, as one doesn’t want to be associated with the likes of the Bagger fruitcakes.
But then, if you look closer, you see that there are a number of Lefties who are also critical of Islam – who get that it’s a threat to freedom of speech, freedom of conscience and the rights of women, minorities and non-Muslims.  These lefties (or ex lefties) include Sam Harris, Christopher Hitchens, Richard Dawkins, Maryam Namazie.
And, most recently Bill Maher.
Bill says: “I don’t have to apologize, do I, for not wanting the Western world to be taken over by Islam?”.
No, Bill, you don’t.
Some more from Maher:
"When South Park got threatened last week by Islamists incensed at their depiction of Mohammed, it served or should serve, as a reminder to all of us that our culture isn't just different than one that makes death threats to cartoonists, it's better."
"Because when I make a joke about the Pope, he doesn't send one of the Swiss Guards in their stiped pantaloons to stick a pike in my ass. When I make a Jewish joke, Rabbis may kvetch about it, but they don't pull out a scimitar and threaten an adult circumcision"
"But before I conclude, it should in fairness be noted, that in speaking of Muslims, we realize that of course the vast majority are law abiding, loving people, who just want to be left alone to subjugate their women in peace."
"I know Muslims living in America and Europe want their way of life to be assimilated more, but the western world needs to make it clear, some things about our culture are not negotiable, and can't change, and one of them is freedom of speech. Separation of church and state is another, not negotiable. Women are allowed to work here and you can't beat them, not negotiable. This is how we roll. And this is why our system is better."
Video here. (Thanks to Jefferson, and JW)
Cartoon above from this site. ("Teabagger Survey, a racism to the bottom")
- November 03, 2010