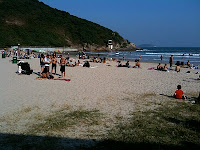 Welcome and intriguing news on the weekend that Zhuhai, just up the road from us Here in Hong Kong, is going to allow visiting yachts without the usual paperwork hassles. Other ports like Shenzhen, are considering doing same.
[photo here: nearly, but not quite, Zhuhai.  It's Big Wave Bay in eastern Hong Kong, with waves not quite so big, but real surfies taking real waves, last sunny Sunday]

Zhuhai smooths the waters for owners of luxury yachts
Coastal city aims to become regional hub for pleasure boats
Fiona Tam and Ng Kang-chung
Updated on Oct 30, 2010
Luxury yacht owners, Zhuhai welcomes you.
Hong Kong and Macau yachts will be able to sail and moor their pleasure boats in Zhuhai waters starting from January without restrictions. This comes after the mainland city announced simplified applications for local licences. At present, yachts registered outside the mainland have to go through troublesome procedures before they can sail into mainland waters.
Though the process may take only seven days, owners who make regular visits need to give up their Hong Kong or Macau licence to apply for a mainland one - an instant turn-off for most yacht owners.
Now, in a scramble to grab a greater share of the lucrative yacht business in the Pearl River Delta, Zhuhai has announced that it will allow yachts registered in Hong Kong or Macau to apply for a local licence without having to give up their original certification.
The new policy will take effect from January 1.
Tang Wan , deputy director of the Zhuhai Maritime Affairs Bureau, said the change would boost the city's efforts to be the delta's main yacht hub.
"Hong Kong and Macau have more than 10,000 yachts. But the number of the boats coming to Zhuhai each year is just about 100 and only two of them have a local licence," he said.
Boat owners in Hong Kong welcomed the Zhuhai government's decision. "There are too many complicated procedures to go through [at present] in order for a Hong Kong yacht to get a permit and enter Zhuhai waters," a spokesman for the Gold Coast Yacht and Country Club said. These procedures included having to take the boat to Zhuhai for the authorities to assess and photograph.
"Most of the yacht owners end up only sailing within Hong Kong waters for fishing or weekend activities," he said. "Maybe more members will want to [get a mainland licence] after the relaxation of the rules."
The Hong Kong Marine Department declined to comment on the new policy. But a department spokesman cautioned yacht owners that the relaxation was just a Zhuhai government policy and would not permit them to sail in all mainland waters. "Shenzhen has its own policy on managing vessels. So the move by Zhuhai should not be taken as a relaxation of rules for all cities in Guangdong," he said.
As Hong Kong struggles to find space to meet the growing mooring needs of pleasure vessels, Shenzhen and Zhuhai are both aiming to tap into this lucrative market. Coastal cities across the mainland are also scrambling to capitalise on the pleasure boat sector as a fast-growing number of rich mainlanders use luxury yachts as a new way to flaunt their wealth.
The Chinese Academy of Social Sciences estimates the mainland's middle class could expand to 100 million people within six years, bringing huge business opportunities for the country's yachting industry.
Zhuhai has been clear about its intention to become a "pleasure boat hub". And, neighbouring Shenzhen, Sanya in Hainan , Xiamen in Fujian , Qingdao in Shandong and Tianjin all have similar ambitions.
Shenzhen hosts the start of the China Cup International Regatta today and, with its 1,145 square kilometres of waters and much cheaper, plentiful berths, is aggressively working to grab a share of Hong Kong's luxury boat market. Xinhua reported early this month that Tianjin planned to spend nine billion yuan (HK$10.4 billion) building a 750-berth "yacht port" by the year-end, allowing the country's super-rich to dock their luxury vessels nearer Beijing.
- November 01, 2010