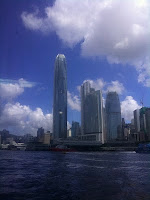 When I first came to Hong Kong in 1976, the proud boast were that we had the most number of Rolls Royces, though I guess that was per capita.  And the most amount of cognac drunk per head.  I don't think these are true any more; at least seeing all the Rollers in London's Mayfair during a recent visit.  And cognac?  I think we've moved on.
Lately we've had the most expensive bit of residential real estate: per square foot that is, on the Peak.  And the most expensive retail space is still, I think, at Causeway Bay.
Then we had a while back some measure that alleged that we had the "most intelligent" population in the world.

Today, news that we've got the biggest turnover in wine auctions, since we did away with the wine tax.  That's beating New York and London.
Chief Secretary, Henry Tang Ying-yen, announcing this yesterday said "we are all delighted to see the business potential that has been unlocked, or perhaps I should say, uncorked."  Ho, ho.
But it really is a great town, this home of ours. If they could only work on the pollution, it'd be just about perfect.  Convenient, compact, a stunning city-scape, safe, efficient.  Not for the faint-hearted, to be sure, with it's laissez-faire government and people left to make their own life.
So, raise a glass to Hong Kong!
[That's my photo, above, with iPhone, from the Discovery Bay to Central Ferry]
- November 05, 2010