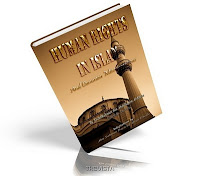 Posting below, for the record, a recent-ish email to a friend and occasional reader of this blog, in response to his request for comments on a talk he's to give on the above subject.
[Click on image of book on the left for link to PDF of an Islamic view of Human Rights in Islam]


You could go to the source of Human Rights legislation: the 1948 UN Universal Declaration of Human Rights.  This has been criticised as being “western-centric” (it probably is; it was 1948, after all.  But still, signatories included China, Pakistan, Ethiopia, Pakistan).  Still, it’s been a well-regarded document by governments and people throughout the world: simple, powerful wording, the sort of wording that any “reasonably person”, would find unobjectionable, Universal as it is.  It does not bind any rights on any basis.  But the Islamic world (and only the Islamic world), via the OIC was not happy with the Universal Declaration and came up with the Cairo Declaration on Human Rights in 1990.  This document does limit human rights, specifically and most egregiously in the case of freedom of religion and the rights of women.  It is, moreover, based purely on Islamic law, Sharia, and not on secular-humanist international principles, as is the Universal Declaration.
This is the nub of the conflict between Islam and the Rest.  That Islam takes as its one and only law the law of Allah. Whereas in the west, we take law as the law of Man.  This is an irreconcilable contradiction in my view, but whether or not these fundamentally opposing views can be reconciled, one still has to take a stance: is one for Universal, unbound human rights; or is one for Human Rights bound and specified by one religion based on their god?
In the case of Hong Kong, we need to look at the way Human Rights legislation will be used by Islamists (here you need to decide if you’re going to say “Islam”, or “Islamists”, the former maybe having more truth, but the latter being more palatable; let’s use “Islamists” for now).  The case in other jurisdictions – in Germany, UK – indeed rest of Europe – in the US, is that there is pressure from Muslims, abetted by many non-Muslims (almost exclusively on the Left) to promote separate Human Rights of Muslims.  Examples are the Sharia Courts in the UK, the push for Sharia Finance (see my posts on this, eg here), the push for consideration of religious customs – eg the case in Germany where the judge took "Islamic customs" into account as mitigation for the beating of his wife (the article via Bruce Bawer refers).
You could Google “Human Rights and Islam” to get some interesting links.  I’ve jotted down a couple below:
In place of the UDHR, OIC member states created an explicitly Islamic declaration (The Cairo Declaration on Human Rights in Islam) in 1990, arguing that the “Western” human rights language in the UN document did not adequately accommodate the Muslim worldview. But as Adama Dieng, then Secretary General of the International Commission of Jurists, argued in a 1991 statement to the Human Rights Commission, this rival declaration not only threatens the inter-cultural consensus on which international human rights instruments are based, it introduces intolerable discrimination against non-Muslims and women, imposes restrictions on fundamental rights, references only Islamic law (or the shari’ah) as its source, and legitimizes unacceptable practices such as corporal punishment (Dieng 1991).
“Islam and Human Rights”, Center for Enquiry International, September 2008. P4.
Ref here.
The concept of Human Rights in Islam is based on the idea that rights are equal for Muslims
Take this quote below from an Islamic apologist.  He’s quoting these sources to try to show that Islam provides “equality before the law”.  But he doesn’t to realise that all he’s proving is how Muslim-centric Islam is!  Equality before the law is only “as far as Muslims are concerned and only do non-believers get equal treatment if they “repent” (author’s emphasis):
12. Equality Before Law
Islam gives its citizens the right to absolute and complete equality in the eyes of the law. As far as the Muslims are concerned, there are clear instructions in the Holy Quran and hadith that in their rights and obligations they are all equal: "The believers are brothers (to each other)" (49:10). "If they (disbelievers) repent and keep up prayer and pay the Ipoor-due, they are your brothers in faith" (9:11). The Prophet has said that: "The life and blood of Muslims are equally precious" (Abu Dawud; Ibn Majjah). In another hadith he has said: "The protection given by all Muslims is equal. Even an ordinary man of them can grant protection to any man" (al-Bukhari; Muslim; Abu Dawud). In another more detailed Tradition of the Prophet, it has been said that those who accept the Oneness of God, believe in the Prophet- hood of His Messenger, give up primitive prejudices and join the Muslim community and brotherhood, "then they have the same rights and obligations as other Muslims have" (al-Bukhari; al-Nisa'i). Thus there is absolute equality between the new converts to Islam and the old followers of the Faith.
Ref here
If you can’t link from here, they’re from my Google search as above.
Also read up on the Universal Declaration of Human Rights and the Cairo Declaration.
I think the sum is: Human Rights Legislation in Hong Kong will be used by Muslims to push Human Rights for Muslims (OK, concede that that’s not objectionable), specifically for the introduction of Sharia (and that is a bad thing).
Read up on the “Reliance of the Traveller”, the Classic Manual of Islamic Sacred Law and approved by Al-Azhar University.   Check it out on issues such as: treatment of women, homosexuals, non-Muslims, apostates, the unequal penalties for killing Muslims and non-Muslims.   All the usual stuff.  It’s all there, approved by Sunni Islam’s highest authority....
.... cheers and good luck!
- November 08, 2010