The Bible is just as violent as the Koran. Not. 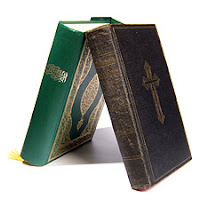 A recent reader's comment on the Bible and the Koran,  along the lines that the Bible is just as violent as the Koran.  Since this is an objection I often get, I thought I'd post my reply here, so I can refer to it later.  My comment first and then the commenter's.

Thanks for your comments,
Yes, I have indeed read the Bible.  I keep both the Bible and the Koran ready to hand.  I'm an Atheist, but I do follow religion and particularly issues of Islam vs Christianity quite closely.
Your comment is one often made, but evanesces on close inspection.  For example, the verses you quote are all from the Old Testament.  The OT has effectively been "abrogated” by the New Testament, for the vast majority of Christians, that is for all but various small fundamentalist sects.  For the vast majority of Christians, the Bible followed and read is the New Testament, which on my reading is almost devoid of calls to violence.  And, after reading the Koran, then turning to the NT of the Bible one is struck — at least I am — by the poetry and call to love in the latter.
More, even in the NT, it is recognised that it written by man — or perhaps I should say “people”, though I’m pretty sure it was mostly men — and therefore is subject to Biblical exegesis, and has been over the millennia.  It has been extensively reinterpreted over the years. No-one (ok, nearly no-one) now accepts the verses you quote as being relevant to today.
By contrast, the Koran is the inerrant and word of Allah, “uncreated”, ie not written by Man.  Therefore it cannot be subject to exegesis or any interpretation by Man.  To try to do so is blasphemy and harshly punishable.  Would-be reformers of Islam, who have tried to re-interpret the Koran has been treated harshly, sometimes to death.
Next: The defence of the Koran, because "the Bible is equally violent" is the tu quoque fallacy. That is, defending it by saying “your book is also violent”. That may or may not be true, but in any case does not excuse the violence in the Koran. It mitigates it not at all.
Finally: one does not have fundamentalist Christians or Jews running around the place quoting the Bible just before blowing themselves — and thousands of innocents — to pieces.  Whereas, of course, that is a daily occurrence for those adhering to the Religion of Peace.
(and if you’re tempted to quote the bombings of abortion clinics here, I’ll grant that, and just note that they are vanishingly small in number in comparison to the mayhem done in the name of Allah; and that such attacks are condemned by clergy and pursued by the law, again in contrast to the violence done in the name of the Koran and the Hadith.)
In short, I don’t think there is any basis to make an argument of moral equivalence between the Bible and the Koran.
Regards,
Peter

I read some of your comments on Islam and I was wondering if you had
read the Bible?

It tells about the many innocent people the Christian god kills (over a
million) for no really valid reason.  And it tellls about how this
"loving" god of the Christians directs He-She-It's believers to KILL and
KILL and KILL some more,

I submit none of the members of the Christian Religion have ANY room to
talk about the Moslem Religion being a bloody one.  In fact, "good"
Christian are directed to kill me for what I have written here, as well
as for my being an Atheist.

Here are a few examples of the Christian god instructions.

Kill Followers of Other Religions.

Death to Followers of Other Religions
Exodus 22:19 NAB

Kill the Entire Town if One Person Worships Another God

Kill Women Who Are Not Virgins On Their Wedding Night

All in All the Christian Religion is not only one Bloody Mess, it is
filled with liars and hypocrites!

I thank you for your time and may we all,   "Live Long and Prosper!