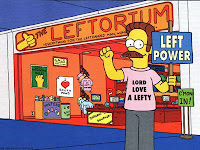 In a recent post, I wondered about the disparity between critics of Islam and Jihad who are from the Right of the political spectrum and those on the Left.  It seems sometimes that those on the Right are the only critics, and that's not good if the Right gets conflated with the nihilist nutters on the Tea Bag far-right.  I noted some critics on the Left, including Sam Harris, Richard Dawkins, Chrisopher Hitchens.

There are many more, of course, and I came across a partial list on the New English Review, in an article by Rebecca Bynum.  She is discussing an attack on the anti-jihad movement by one Bob Smietana, a paid up member of the Left, writing in the The Tennessean.
Pym Fortuyn (mentioned below) is an interesting one.  Fortuyn was murdered by an "environmental extremist" (aka hard-left loonie), who was upset at Fortuyn's views of Islam.  Fortuyn was known himself as being of the Left, believing as he did in equal rights for women, racial equality, abortion, euthanasia, climate change activism, and the rest of that panoply.  But as soon as he became a critic of Islam -- a well-read critic, one might add -- he was labelled a conservative and became, magically, "ultra-right" wing.  Of course, he was nothing of the sort.  He was still of the Left, just that he'd understood the danger of Jihad -- both violent and stealth -- and was murdered for that knowledge.
Theo van Gogh was the same, of course, murdered by an Islamist upset by the movie he made with Ayann Hirsi Ali (a Muslim apostate and champion of women's rights especially for Muslim women), which was critical of women's subjugation by Islam.  Hirsi Ali should be added to the list of leftist critics of Islam and Jihad.
Bruce Bawer is also well worth reading.  Based in Norway, he is an American, gay, married to his partner, a well-read member of the Left, and insightful and trenchant critic of Islam. Here's a taste of his writing, a comparison and contrast of two seminars on Islam, one in New York and one in Norway.  Bawer is multi-lingual.  My own count of languages he speaks and translates into and from is: Italian, German, French and Norwegian.  Here's an article by Robert Redeker, a French philosopher and teacher, which Bawer has translated from the French (Redeker he is currently in hiding from members of the Religion of Peace, for having had the temerity to criticise Islam).  There are many other articles of interest on that site (Human Rights Service, a Norwegian site)

These two biases, anti-Zionism and anti-anti-jihad often appear together in articles written by self-identified members of the far-left like Daily Kos, but even the leftist Huntington Post publishes Islam critical articles by authors such as Sam Harris, Irshad Manji and Ayaan Hirsi Ali. The list of left-leaning anti-jihadists is a long one and I brought this fact to Mr. Smietana’s attention on numerous occasions. It includes such people as Orianna Fallaci, Pym Fortuyn, Theo Van Gogh, Bruce Bawer, Pat Condell, Caroline Fourest, Paul Berman, Ibn Warraq and Hugh Fitzgerald all of whom understand (or understood) the threat to civilization caused by unchecked Islamic expansion. By attempting to portray the anti-jihad movement as the sole province of Christian Zionists, Smietana was being intellectually dishonest and deliberately misleading.