High Anxiety: the fear of naming the unnameable

I think of this scene at times, when I read the writings of Thomas Friedman, when he writes about Islam and terrorism.  "He's got it, he's got it", you think, as he writes about the horrors done in the name of Islam, then, thump, "he ain't got it", as he fails to make the final connection: between the doctrines of Islam and the violence done in its name.
He does the same today, in the New York Times, in "Long Live Lady Luck".
He enumerates the various failed plots by Jihadis, then goes on to talk of


"a civil war in the name of Islam today between the forces of decency and modernism and the suicidal jihadists.  This stuff only stops when teh Muslim forces of decency triumph -- and delegitimate and crush the barbarism of Al Qaeda.  It takes a village, and its going to take a while."

Well, here "he ain't got it".  Or it's his High Anxiety to state the obvious: that there is nothing in the doctrine and theology of Islam, the ideology of Islam, to give those "forces of decency and modernism", anything on which to hang their hat.  There is nothing in the doctrines that support the creation of that "village".
The only way that a Reformation of Islam might even begin to take place is if the very creation of the Koran -- the belief that it is the inerrant and uncreated word of Allah -- is not challenged.  That is that the obvious and scientifically known is stated and accepted: that the Koran was written by men, not given to Muhammad by the Angel Gabriel, and that it was written many decades after Muhammad's death.  Only in this way can the calls in the Koran, clear and unambiguous, for death to all non-Muslims, be challenged.
Now this is simply an enormous ask.  Just today, I see news of a would-be reformer who was exiled and threatened for daring to suggest that very thing: that the Koran involved the hand of Man.
Many scholars have analysed the issue of the Reformation of Islam, and deem it next to impossible.    But the important point is: as long as it is not attempted, there is no hope -- none whatever -- for the "village" to be built, for those "forces of decency" to gain any leverage and doctrinal support.
Is that why Friedman drops his version of Thorndyke's trunk?  That it's nearly impossible to lift?  That the reality of the doctrinal call in Islam to kill unbelievers "wherever you find them", is just so scary that it gives well-meaning commentators High Anxiety? 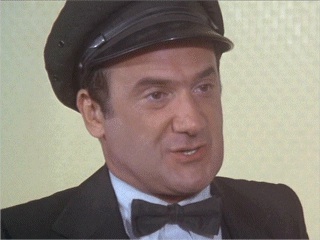 Ron Carey as "Brophy" the driver in Mel Brooks' 1977 film High Anxiety
References:
"Islam has its Luthers too, but reform is far away", Sandro Magister, Chiesaespressonline.it
"Can Islam reform from within?", Madeline Brooks, American Thinker, October 30, 2009. Here.
"How the clergy wanted Sir Syed beheaded" [for proposing reform of Islam], Arif Mohammed Khan, The Times of India, 19 October 2009
- November 08, 2010