"The Guidebook to taking a life", Six rules for murder in Islam 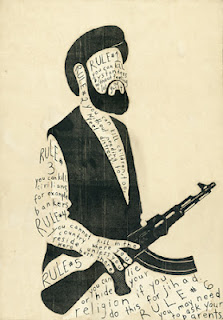 Wow, I found this pretty interesting: "The Guidebook to taking a life" by Souad Mekhennet.  It's old news, for sure, nearly five years old, but I didn't know -- did you? -- that there are rules for killing infidels?
I mean, if I were being cruel, which I'm not, nor bigoted, I'd be inclined to mock and say that the only rule of a radical Jihadi, an Islamic Supremacist, or whatever nomenclature you care for these murderous dudes, would be one rule: "See Infidel --  kill Infidel".  But I'm not being cruel, so I won't say that, even though, of course, it's right there in the Koran, in pretty well those exact words...
And I won't say that Rule #1  of Islamopologists is a bit like the Fight Club Rule #1, viz: "don't talk about Islam", even, or maybe especially, its violent manifestations, such as "Rule"-based murder (to do so is Islamophobic, don'cha know).
I came across this "Guidebook" article when I was doing some research on Mekhennet, who had a piece in the New York Times a few days ago which I critiqued here.

Ms Mekhennet did a series called "Inside the Jihad" back in 07-08, of which this was the third.
I must say, reading this "Guidebook" article again -- and especially after her recent piece in which she gave a voice to a deluded and self-confessed "confused" Islamaopologist -- I get the uncomfortable feeling that perhaps Ms Mekhennet has a wee bit of a thought that having these "Rules" somehow mitigates the murder they do in the name of Mohammed.  I dunno, it's just that her report on these "Rules" she has gleaned from her wanderings in the region strikes one as strangely detached at best -- perhaps even sympathetic.  Don't you think?
Anyway, interesting piece, I thought and wonderful cartoon, above, that accompanies it.
LATER:
I think it's worth having a summary of the "rules".  They're pretty chilling.  So here they are, the Six Rules for a good Jihadi:
Rule No. 1: You can kill bystanders without feeling a lot of guilt.
Rule No. 2: You can kill children, too, without needing to feel distress.
Rule No. 3: Sometimes, you can single out civilians for killing; bankers are an example.
Rule No. 4: You cannot kill in the country where you reside unless you were born there.
Rule No. 5: You can lie or hide your religion if you do this for jihad.
Rule No. 6. You may need to ask your parents for their consent.
- February 17, 2012