Schettino, "the careless one", steers Costa Concordia onto charted rock

Well, guess what? I looked up "the meaning of 'Schettino'" and got this:


“Schettino, for instance, can be a diminutive of Francesco; but it also translates as `
careless
. ”
Verbatim: VERBATIM: The Language Quarterly Vol XIX No 2 [*]
[I was actually looking to see if there was some meaning of "Schettino" that I could use in a smart-arsed title for this blog; but this'll do]

Schettino is, of course, the name of the captain of the ill-fated Costa Concordia, currently lying on her side at the North-east bit of the Island of Giglio in Italy, after a prang with a rock.  And was he "careless"!  Oh boy, was he ever!

The point of this rather off-topic post is this: to say that the accident was clearly and unequivocally the fault of Schettino, the "careless one".
When I first heard of the accident I said to Mrs Battle I said "it's the captain's fault".  At the time -- and still today [**] -- Schettino was claiming he hit an "uncharted rock".  But there's no way a rock around Giglio would be uncharted.  Here in Hong Kong, where we've been sailing for many years, we use Chart-plotters and paper charts and there's no rock or reef that is not charted.  I speak from some bitter experience, as we've hit a rock ourselves, and, yes, it was charted, but that's too long a story to go into.  I also have charts from Navionics installed on my iPhone and it also has all the rocks and reefs charted -- so far we've not found any that aren't.  Just to make sure, I installed Navionics for Europe and sure enough the rock the Costa hit is clearly marked.  It's even now been labelled "Costa Concordia Rock"!

If all the rocks and reefs are indicated on charts of Hong Kong, occupied only for a hundred years or so, they are even more thoroughly marked for Italy, on seas sailed since Roman times.

There were some early comments that maybe the instruments failed on Costa.  But again, that's a crock. On our boat we have the electronic charts.  But if they fail --and they have, whilst on the ocean -- we have hand-held GPS back-up, also with charts loaded.  And as final fail-safe there are the paper charts and sextant.  Are we supposed to believe that a 115,000 tonne cruise vessel has less electronic and paper chart back up than our little yacht?

What happened was that Schettino -- carelessly -- came too close to the peninsula marked in the chart above.  His carelessness was compounded by the fact that he was doing this "sail-by" at night.  And was doing it "by sight" alone!  It's notoriously difficult to tell the distance at night.  What does puzzle me, though, is why none of his other crew on the Bridge didn't point out to him that he was sailing straight for the newly-named "Costa Concordia Rock", and I hope we learn about that in due course from the enquiry.

The chart above is from a BBC report, which indicates that the "incident" happened in the middle of the circle. It didn't.  Where she hit was at the bottom left of the circle above, where the peninsula sticks out. There's a rock just to the right of the little island you can see there (I'm sorry I don't know how to mark it on the picture), which is at depth of 7.3 m.  That's marked -- on my iPhone Navionics Chart!! [To be precise: 42 21.333' N 10 55.830' E.  Copy/paste that into Google Maps and see where it takes you.  No big ship should be there].
Costa draws 8.2 m, so there you have the reason for the "incident" -- 8.2m doesn't divide into 7.3m.  Mind you, that 7.3m is the minimum depth at Lowest Astronomical Tide, and since tides around there are perhaps 1 metre, he must have hit it at low tide. Had the tide been high, he may have just passed over it. Bad Luck? Uh-uh: bad management: "careless"!

In any case, for a captain to take a huge cruise liner, close to land, at night, by sight, all of these mean he's... 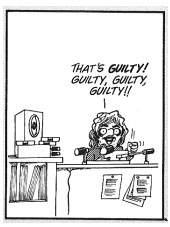 I don't touch here on the egregious way Schettino acted after the prang: leaving the ship early, refusing to return, and so on.  So that his name, in addition to meaning "careless", will also become a synonym for "coward". One take on this, amongst dozens: Mark Steyn's "No more women and children first".


***********
[*]: Clearly the folk at Verbatim are having a bit of fun. The real meaning of "schettino" is a kind of roller skate.  And I can't make much of that, save for his skating close to danger
[**]: AFP story in today's South China Morning Post is behind a paywall.  It says:
"He [Schettino] says he took the ship on "tourist navigation" to bring it close to Giglio but that the reef he hit wasn't on his nautical charts."
PF: "Impossible"!
- February 01, 2012