Home truths about trade with China 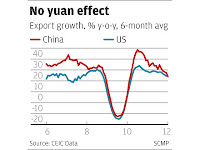 Having caned Beijing over its veto of the UN Syrian Resolution, I'm back to trying to correct some misperceptions about China.  I've commented in the past on criticism  of China's currency being "overvalued" and "unfairly" so: most of China's trade is denominated in US dollars, so the value of the Renminbi Yuan is largely irrelevant.  Moreover, the Yuan has increased in value by about 25% in recent years, with hardly a dent on China's trade with the US.
I also noted the other day that the proportion of US consumption accounted for by China is only 2.7% by the estimates of the Federal Reserve Bank of San Francisco.  And the amount of US debt held by China is only 7% so the hysterical worries about China's control over the US economy are just that: hysterical.
Old mate Jake van der Kamp takes up this case again, in his inimitable way.  If Jake's column is all you read about economic issues in China and Hong Kong you won't go far wrong and you'll be better informed than most (and certainly way more than most US politicians).  If you add another commentator, make it Tom Holland and his daily Monitor column in the SCMP.
South China Morning Post articles are behind a pay wall, so I've copied and pasted it below the fold.
Thanks Jake!