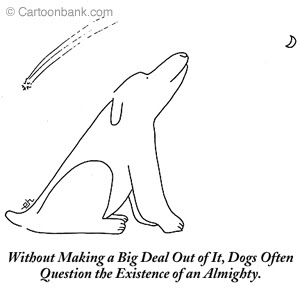 Richard Dawkins “…remembers that his grandparents had an old book about birds in which the entry on the cormorant began: ‘There is nothing to be said for this deplorable bird.’”

No such biological bigotry from Richard Dawkins, author of just-released “The Greatest Show on Earth”.  For 13 years Professor Dawkins was the Charles Simonyi professor of the public understanding of science at Oxford University, a position created for him.  He left the post last year when he reached the mandatory retirement age of 67.  He is curiosity personified, interested in


“…giant butterflies and tiny moths, worms disguised as snakes, why goats are related to whales and whether beetles have two sets of wings…”. (ref).


Yesterday I heard a program on BBC Radio international in which a creationist teacher takes kids around the Museum of Natural History in New York and explains to them that “it’s not really a museum but a church”, because it expresses nothing but a faith, not science; and because it solicits donations, just like a church.  This creationist –  a slick songster it must be said, but with rather less scepticism than the dog above –  tells the kids repeatedly that “there is no proof of evolution”, since there have been no repeatable experiments to prove it.  Quite wrong, as you learn if you read “The Greatest Show”.  There are at least two that I recall: one with guppy populations in Trinidad by Dr John Endler (p 133 et seq) and one with bacteria, by bacteriologist Richard Lenksi et.al.(p 117 et seq).

Another interesting fact from the “The Greatest Show”: that fossils are only an extra bit of cream on top of all the other evidence for evolution.  There is plenty of evidence for evolution even without any fossils.  But the creationists emote and obsess over the “gaps”, so-called, in the fossil record.  As Dawkins points out, there’s always a “gap” – if you have two fossils separated in evolutionary time, there’s a gap between the two; if you then find an intermediary fossil between the two, you now have two “gaps” between these three, and if you fill those, you now have four “gaps” between these five fossils, and so on.

I took Dawkins’ “Show” on holiday, having promised my wife I’d read something not related to my favourite subject (begins with “I” and ends with “slam”).  But I was no further in than page 5 when I read:


“When [science teachers] attempt to expound the central and guiding principle of biology…t they are harried and stymied, hassled and bullied, even threatened with loss of their jobs.  At the very least, their time is wasted at every turn.  They are likely to receive menacing letters from parents, and have to endure the sarcastic smirks and close –folded arms of brainwashed children…. Once, we were tempted to laugh this kind of thing off as a peculiarly American phenomenon.  Teachers in Britain and Europe now face the same problems, partly because of American influence, but more significantly because of the growing Islamic presence in the classroom – abetted by the official commitment to ‘multiculturalism’ and the terror of being thought racist”

Yikes!  Can’t escape the big “I”.   Can it be that the good professor, FRS, FRSL, ethnologist, zoologist, neo-Darwinian evolutionary biologist and theorist, is a horrid bigot and “Islamophobe”?