The Road to Palmyra 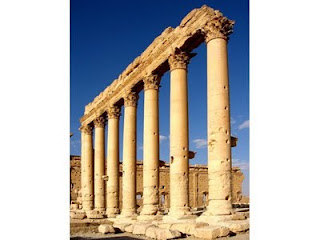 Palmyra's Temple of Bel, SCMP, 28 Oct
On our recent boat trip in the Cyclades, some fellow yachties joined us for drinks.  They were from Syria and our ever-curious boat-mates asked them about tourism there.  They said there were plenty of interesting spots to visit in Syria, mentioning Palmyra as one: "the desert oasis where caravans met in ancient times bringing silk from the mainland and spices from India to Europe."
We had just had a mention of Palmyra, when in our rubber dinghy, ladies worried about it's turning turtle and I assured them that it could not: that had been established in the murder case of Mac and Muff Graham on the pacific island of Palmyra in 1974, a story excitingly told in "And the Sea Will Tell", by Vince Bugliosi (who also prosecuted the Manson family and wrote about it in "Helter Skelter").  Part of the defense relied on the claim that a rubber dinghy had turned over in the lagoon, drowning Mac and Muff.  Bugliosi and the prosecution proved that it would not.  Prosecution was secured.
A short time after assuring our crew-mates of the stability of the dinghy, I proved it wouldn't tip over, but that it was still be possible to fall out of it, as I did when removing the engine, falling into the water and destroying iPhone no. 5....
Then today in the South China Morning Post, as feature about Damascus and Palmyra, whence the quote above and the news that


"Pottering amongst the ruins is American film director Francis Ford Coppola, enchanted by the story of Zenobia, the third century Palmyran queen of legendary beauty, bravery and intelligence.*   Coppola insists  he is in holiday, not scouting for locations.  But it is hard to find a more dramatic setting:  Palmyra boast nine-metre Corinthian stone pillars, multi-sotry funerary towers, sensational sunrises....".  Article in pdf here . (Link to the post here , but needs login)

This proves yet again my old auntie's observation: that you don't hear about something, then all of a sudden you hear about it all over the shop.  I hadn't thought, or spoken of Palmyra since reading Bugliosi's book twenty years ago, then three times in a week.  Our auntie was also right about something else: speaking in the sixties, she said "the climate is changing".  We kids used to say "auntie, the weather's changing maybe, but the climate doesn't change".  How wrong we were.  It's always changing, it turns out, but if warmer or colder, if man-made or not, that's the question.  There, I've said it.