A case of Potemkin gone awry 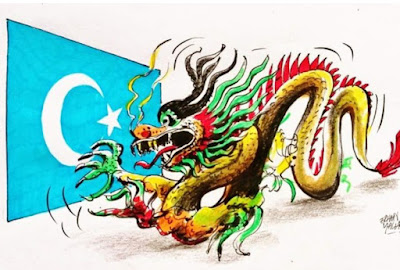 This guided visit to Xinjiang was supposed to convince the delegation that China is doing just fine and all these Uygurs are happily studying in “Vocational Training Centres”, their very own Potemkin villages.
It didn’t quite go as planned.
Read about it in “What can the Muslim world do to save the Uighurs and Islam in China”, from the Daily Sabah.


The Muslim countries should reconsider their position and urge China to immediately stop the persecution of Muslims and the prohibition of Islam in Xinjiang. China must close its "Vocational Training Centers," release the religious and political prisoners from prisons and detention camps, abolish the Islamophobic and criminal "Xinjiang Uighur Autonomous Region De-extremification Regulations," stop sending Chinese colonists to the homes of Uighurs and order all state apparatuses and organs to stop their persecution of Muslims.

Mind you, I would not be quite so sanguine about Xinjiang not having separatist ambitions. Big chunks of it do, and they are all the Muslim areas.
- December 02, 2019