'Did the police use "excessive force" against protesters in Hong Kong?' 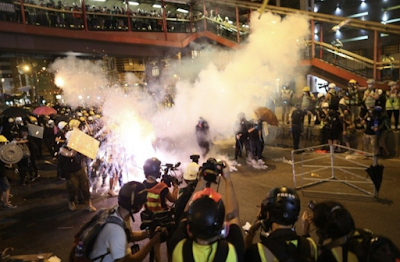 This (pasted below the fold) is from a few months ago, but holds up well. A view from Andrew Mak, a HK resident since 2000. I think it’s a fair representation of what’s going on here in Hong Kong. The police have made mistakes. But they’re not the brutes the protesters claim. Overall, there’s misrepresentation in the mainstream media. Protesters are given a free ride and the police are hammered.
The link is here and you have to scroll down for this article. It’s also below the fold…
As someone who lives in Hong Kong, slightly against the continued violent protests in Hong Kong, and who has had discussions around this topic with friends that actively support and engage in these protests, I hope I am able to provide a more nuanced perspective on this topic.

To answer this question properly, we first need to define the meaning of “excessive force” and the “appropriate amount of force”. During conversations with my friends, they expressed that the appropriate amount of force would be “an equal amount of force to what protesters use”, or just enough to contain these protests and ensure these protests are safe.
While this is a simple and reasonable idea in theory, I feel that this is extremely hard to put into practice, especially in the high pressure environments that police face in these protest scenarios. What is usually downplayed is that violence in these protests occur on both sides: while some police have used tear gas, rubber bullets, and beanbag shells to supress protesters, violent protesters have thrown bricks and assaulted police during these protests.
Article showing an example of violence from both police and protesters: Night of violence shocks Hong Kong after seventh week of mass marches
Furthermore, there are serious consequences for when the police do not use sufficient force to contain the protests as well: when the police withdrew from the Legco building, protesters severely vandalized the building, and police recieved criticism for not using enough force!
Article showing the extent of Legco vandalism: Smashed and ransacked Legco could cost HK$10 million to repair
To conclude, I do think that while police have sometimes used excessive force against the Hong Kong protesters, it is extremely hard to use an “appropiate amount of force” for every single incident, and that the HK police do not get enough credit for containing the protests as well as they are doing currently. Ultimately, while I agree with some of the ideals the protesters are fighting for, violent protests must stop, as they create chaos in Hong Kong, turn public opinion against the protesters, and have lead to dozens of injuries. Why riot in the streets when peaceful protests have already resulted in the government shelving the extradition bill?
I hope I was able to provide a unique perspective on this issue, and I hope you enjoyed this answer!
- December 28, 2019