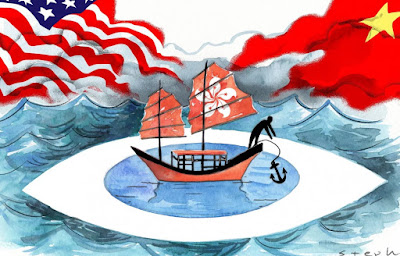 I’ve argued on this blog that the protests gripping our once fair city are more about nativism than Freedom and Democracy, yay! Sure, there are idealistic protesters.  But most of them are worried, are upset, are resentful, about mainlanders in their Cantonese city. Mandarin-speaking Chinese are not cousins; they’re “locusts”.
And just to make it a perfect storm, Trump happens to be fighting a trade war with China. Hong Kong became a pawn in the great chess game.  Coverage of Hong Kong protests in American media (and by extension western media), is ten times more extensive than coverage of other protests around the world, even as the others are more violent and deadly. And about Hong Kong it’s all the one narrative, from the left and right, from CNN to Fox: brave protesters facing up to the evil tyrant fighting for Freedom and Democracy, yay! The same tyrant that is also a serial trade and investment cheat.
Robert Lee has an interesting article in today’s Post, good article and much on point.
I do have a couple of quibbles:

a.  Lee says that the median income of the top 10% of Hongkongers is 43 times that of the overall median of $HK16,000 per month. That would make it $HK688,000 per month or over $US 1 million per year per family. For the top 10%?? It didn’t sound right to me, and I’ve been unable to confirm it. The latest salaries survey has average monthly income for the highest paid at around $100,000 per month. For a family you’d be hard pressed to multiply that out to 688k per month.
Still, there’s no doubt Hong Kong has a very unequal income structure. Our GINI index which measures inequality is very high (=“bad”), at around 0.53, iirc.

b.  A second quibble: Lee talks of the frustrations of local young kids, their resentments at the increasing economic strength of China. All true. But he doesn’t mention that Hong Kong young kids won’t get off their butts and move for a job. They won’t even move to China.
I remember, decades ago, when I lived a and worked in China, being amazed when I visited Hong Kong, at how many people would proudly admit that they’d never visited China, let alone upped sticks and moved there. That continues to this day.
Forty years ago I accepted a job in China. Because that was where the work was. I have no patience for people, young people especially, who won’t move for a job. Hong Kong youth won’t move to a place right on their doorstep, a booming place, because their fragile sensitivities don’t accept the social system there. To that precious concern I say, screw it.
- December 11, 2019