Full on delusion as trust in police plummets 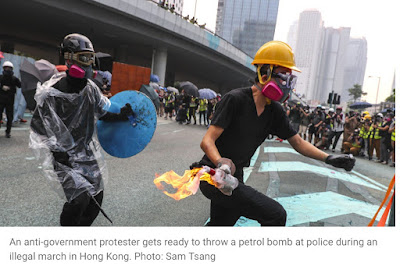 An article in today’s Post reports “police reputation in tatters”. It’s true that it is (in tatters). It’s not true that it’s deserved. I see police arrest someone who is vandalising a restaurant. Others see police brutality. I see police trying to stop crime. Others see police mass rapists and “murderers”. Really!
Police have managed over six months of violent protests without killing a single person — unlike police in other cities —  but are accused of murder. The only murder is by protesters of innocent bystanders, but it’s police reputation that’s “in tatters”. A fifth of Hongkongers support protest violence and call for police to be disbanded! Go figure.
This is a case of mass insanity, of delusion at a city level, enabled and driven by social media.
It’s really weird to see it happening right in front of your eyes.
And yes, you need to keep your head, be aware of confirmation bias, be aware you too can be seeing just one angle and it may be wrong. But I’m not a cultural relativist. It’s not a matter of two sides to every story. The police have made mistakes. But they are not the brutal monsters they’re made out. They are not murderers. They have not committed mass rape. And we do need them (just as any decent city does). They are viewed poorly. But they do not deserve it.
My mate Yonden, on the police issue …
I thought I’d seen it all, living in the twilight zone of Hong Kong’s great revolution of our times, but obviously not.
Friday night was yet another surreal, straight-up mental episode when police intercepted a teenage suspect in a Tai Po neighbourhood as part of their investigations following the recent seizures of home-made bombs and firearms. 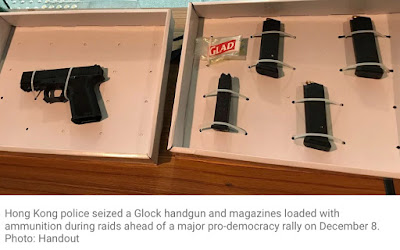 The teenager pulled out a semi-automatic pistol and fired one round at the officers who managed to subdue him without anyone actually getting shot. Police then raided his flat at the estate, where they seized an assault rifle, along with more than 200 rounds of ammunition.
“The firearms and ammunition found match the intelligence we collected, which is about someone planning to use guns in public assemblies to hurt people,” a senior officer said.

There was more madness to follow. While police had the suspect hooded and handcuffed at the crime scene, the riot squad had to be called in when they were mobbed by an angry crowd of protesters and local residents demanding his release.
It all went pear-shaped as insults and objects were hurled at officers who let loose with tear gas.
Let’s just take a step back here and digest this. An armed suspect opens fire at police in a crowded neighbourhood and the public would rather he be left alone. Anything but police in their backyard. Criminal elements among the revolutionaries are stockpiling guns and ammunition, improvised explosive devices and God knows what else for possible use at anti-government mass rallies, but they should be given a free pass because they’re doing it in the name of fighting for our rights and freedoms. Police are the only bad guys.
An online survey commissioned by the Post shows the reputation of the police force in tatters, with nearly three-quarters of the city’s voters saying their trust in the 30,000 men and women who are supposed to protect and serve them has been eroded because of their handling of the protests.
Nearly 30 per cent of respondents had zero trust in police, prompting the survey organiser to note: “It is a figure we expect to see in authoritarian states.”
I hate to burst your bubble, folks, but if you consider this city to be an authoritarian state, you need to get out some more, see the rest of the world. There’s no doubt some frontline officers are starting to lose control as they reach the end of their tether after months of relentless protests, regularly punctuated by mob violence, vandalism and good, wholesome fun and anarchy – while an impotent government, incapable of coming up with a political solution that would pacify the public and end the chaos, continues to cower behind the police force and reduce it to a goon squad.
But to actually label them as “worse than Isis” – really? Just look how far the rhetoric has gone, blinded by incredible hate and sheer ignorance
.I’ve lost count of the number of times I’ve seen riot police arriving at a scene to stop road invasions and vandalism, only to beat a hasty retreat as local residents and protesters alike scream at them to get lost and attack them. Citizens apparently don’t mind the lawlessness, they just don’t want police.
“Disband the police force!” is a slogan I hear all the time. There’s no point in arguing with hysterical youngsters about this kind of thing, unless you enjoy being lynched, but I’ve asked purportedly intelligent and educated adults who share the same sentiment about police what comes next if their wish were to come true.
The answer? “We don’t need them. We can set up a citizens’ police force to maintain law and order.” I give up.
In the face of such nescience and naivety, against such odds, why bother if you’re a police officer? Let’s do it. Let’s disband the police force. Let’s go down in a blaze of nihilistic glory to Hong Kong.