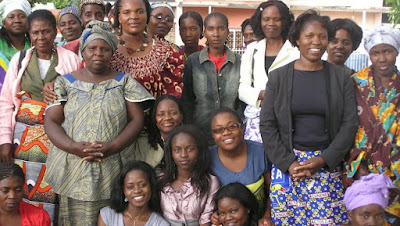 Huh?
That was the headline of an article in today’s Post.  I thought…weird. Worse than Angola? I’ve been to Angola and I’ve been to Japan. In Angola the women carry firewood in their heads, cart the drinking water, lug the kids. The men, if you see them at all, are out front, riding a donkey, smoking. Women do all the work at home and most of it in the fields.  And we are supposed to believe that they are better off than women in Japan?
I googled it and find the same story, same headline on lots of sites, like this. Turns out that it’s the one story, emanating from the Post’s correspondent  in Japan and based on a report on gender from the World Economic Forum.
A closer look at that report shows that the reason women in Japan score lower than those in Angola — all according to the WEF — is that they don’t have the same proportion in senior government or business.
That may be so, but it does violence to common sense. Which is that women in Angola, the vast numbers who are not on company boards or in parliament, are savagely worse off than the average woman in Japan.
What nonsense to suggest otherwise.  Ask any woman of any ethnicity and from any country whether she would rather live in Angola or Japan.
A couple of stats:
Angolan women: life expectancy 61 years. Literacy rate 65%.
Japanese women: life expectancy 82 years. Literacy rate 99%.
But sure; women are better off in Angola.
(They’re probably happier though! The pic above is typical. As we found all over Africa, folks, women and men, smile and laugh a lot. A real lot).
- December 19, 2019