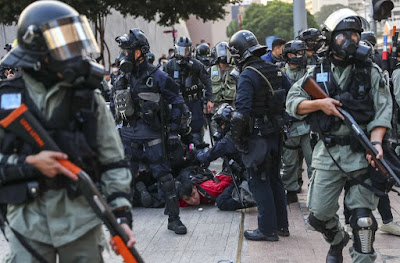 Sigh… one way or another, we’re screwed. When you have thousands of our youth who think the way forward is to vandalise your enemy's property and our public infrastructure, immediately after you’ve just made some political gains, we’re doomed. My pessimism grows.

Tens of thousands of Hongkongers returned to the streets on Sunday a week after the pro-democracy camp’s landslide election victory, but their procession rapidly descended into stand-offs with police and, by nightfall, mobs once again trashed shops with mainland China links.
After nearly two weeks of relative calm, chaos returned to the Kowloon side of the city by evening, as a group of protesters hurled bricks and police fired tear gas, while radicals set about smashing restaurants* and shops in Whampoa and vandalised the exits of the railway station there.
They unleashed their acts of destruction after a peaceful march that began in the tourist district of Tsim Sha Tsui with crowds, many of whom were in their trademark all-black gear but also including families with children in tow, streaming in to the waterfront promenade.

* ADDED: this is the “reason” they attacked Yoshinoya, the Japanese noodle chain restaurants in Kowloon:


Yoshinoya outlets in Hong Kong were targeted to be boycotted and vandalized by anti-government protesters during 2019 Hong Kong protests. Hop Hing Group, based in Hong Kong, is the licensed operator[ of Yoshinoya in the city and Mainland China. Its CEO Marvin Hung was criticized by protesters for attending a rally for Hong Kong police organized by pro-Beijing camps.[16].

Were pro-government people scared off voting in recent Council elections by fears of doxxing like this? Some, surely.
- December 02, 2019