‘If this is the democracy Hong Kong protesters want, they deserve it’ 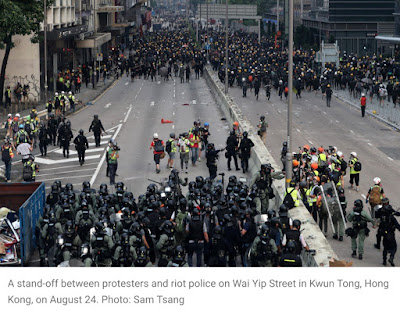 Good letter. Is it possible, objectively, that the police have suddenly gone from the best to the worst? Of course not. It’s all (or mostly) perception. Fuelled by social media. The police are not blameless and have made mistakes. But they are not the brutal bullies the protesters make out.


ADDED (10 Dec): maybe “they deserve it”. But what about the rest of us? The silent majority or the silent very-large-minority? I’m happy for them, the protesters, to have their freedom of speech. But my freedom of speech is to say that I don’t agree with their millenarian posturing, for it’s dangerous for all of us. No I don’t accept their offer to “Burn with us”.


It is interesting to examine the rather unexpected downfall of Hong Kong’s police force, from “Asia’s finest” to the villains they are seen as today, in the span just over a half year.
For most protesters, it would seem that the tipping point was the Yuen Long attack and the delayed response from the police. The police force, which numbers more than 30,000, had reasoned that they were extremely short-handed from dealing with the protests.
However, protesters (who in their heyday claimed to be 2 million strong) doggedly refused to believe the police are, after all, only human. Human beings who have had to clear roadblocks, file paperwork, control crowds, withstand heckling and doxxing, brave potentially life-threatening physical assault and more. They are not emotionless killing machines but fellow human beings, just like us.
I firmly believe that actions have consequences that may turn out the opposite of what was intended. For protesters, the delayed police response has become the basis of their moral high ground, as many in the original pro-democracy movement turn into rioters, firebombing mainland China-linked shops and public property, harassing, viciously assaulting and even setting fire to opponents.
Diehard rioters will argue that this is self-defence, in fear of China's crackdown. They do not realise the eerie similarity between their actions and those of the Red Guards. Ironically, they have become what they claim to fear and hate. Not to mention the xenophobia against mainlanders.
When rioters who throw petrol bombs, acid and sharpened weapons
at police are arrested, their cries turn to police brutality and torture. If these “student leaders” are tomorrow’s leaders and this is the “democracy” that so many in Hong Kong support, we should let them be.

When the dust settles, and the ones with foreign citizenship have fled Hong Kong, the consequences will be borne by those who once supported this so-called democracy.