I remember early on in this pandemic, way back in early 2020, hearing an expert -- an epidemiologist or virologist -- saying that we could never get to a "zero covid" situation, as that was not possible. I bought this. And I assumed everyone else did too. After all, weren't we "following the science"? Weren't we outsourcing decision making to the experts?

Then, a bit later, an expert told us that we humans have wiped out only one virus in all our history: Smallpox. I've checked this and it turns out it's true! All the others that we don't think about any more, like polio, measles, ebola, are still with us; they're endemic not pandemic. And we live with these viruses.

Then Australia snuck in with a de facto Zero Covid Policy (ZCP) by shutting its international borders, early on.  They never said that it was ZCP, iirc, but that's what it was. Still, it did seem to have nipped the virus in the corona, as it were. We all recall that Australian Open in 2020, with crowds in the stands -- no masks! -- and Aussies going about their business, carefree! Bronzed! Sun-loving!  They couldn't travel anywhere outside Oz, of course, but then whydy'a need to leave god'zone? An enforced stay at home, in paradise. While the rest of the world see-sawed between lockdowns and easings.

Hong Kong did the same -- the ZCP -- but so sneakily that I didn't even notice. The government never said "we're going ZCP", but sure enough that's what it is and remains so. Ditto our dear motherland, China.

I struggled to understand the exit strategy for ZCP. When you do open up how can you keep the virus out? Especially the Delta variant?

Then, I realised that that ZCP folks are working on what we might call the "Vaccine saviour theory". Cometh the vaccine, commeth the saviour. When we reached 80% fully vaccinated (a figure we settled on only after a considerable amount of waffling between 60 and 90%), you can -- slowly, carefully, prudently! -- open up again.

Now, it turns out that's not enough either. 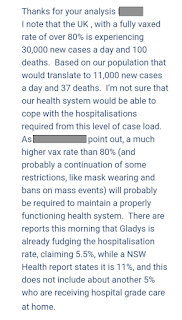 This note (at left) is only some Canberra bike riders -- mainly public servants and academics -- sharing their thoughts. But this is widely shared as far as I gather in Australian media and influencers -- the call for both a "much higher vax rate" than 80%, and "continuation of some restrictions like mask wearing and ban on mass events". When NSW Premier Gladys Berejiklian's (a Liberal) called for opening up with other states on reaching 80% vax-rate, Tony Walker, a senior and respected journo, said she was "Proposing COVID Roulette". Wow! The goal posts are being dug up, ready to shift them even further up the field, as we speak.
The note is correct about the UK and Oz figures for cases and deaths. But he's not right about the hospitalisations issue. The Australian health system is better able to handle an increase in Covid cases than is the UK. We have 52% more hospital beds and 37% more ICU beds per capita than the UK which has the lowest number of beds per capita in the G20, but is doing just fine following its recent opening up. In NSW, there's a surge capacity for ICU capacity with is 3 times greater than that in the UK:

Ms Berejiklian said the state had a surge capacity of up to 2000 ventilators and 1550 fully staffed ICU beds. [Ref]

But if the Forever Lockdown folks say that even with 80% vaxxed, we, Australia, cannot open up, then we must ask: "If not then; when?". If 80% vaccinated doesn't do it, what will? The answer, whatever it is, cannot be trusted, given the constant shifting of these goal posts. Remember "flatten the curve"? Oh naive us!

A couple of points on the map above:

Australia must come out of its Zero Covid delusion and commit to to opening up when vaccination rates hit 80% (or even, dare I say it, 70%). And if not, the question must be "if not then, when?"
The ZCP fans keep saying that the alternative is "let her rip". I seem to recall Boris using the phrase, and the ZCP-ers have picked it up. But it's a bad faith misrepresentation. People on the Lockdown sceptic side of the debate are not saying we should simply "let her rip". We're saying that protections should be focussed on the most vulnerable, vaccinations rates as high as possible and for the rest of society: get on with life, as much normally as possible. And if you feel vulnerable, don't go out or wear a mask. There's zero evidence that the currently draconian regimes are doing any better than such a focussed strategy.
RELATED:
Five more lowlights from Australia's Covid fight  7 September 2021
Why has Australia switched on Covid Zero?  4 September 2021
Covid lockdowns hit Australian economy  2 September 2021 (Available to 26 Sept)
Prison Island 28 August 2021
Wishful thinking 30 August 2021
Small business suffering in Australia, result of lockdowns  29 August 2021
Why has Australia's Covid strategy faltered?  30 July 2021. A BBC experts' panel
Australia's Covid Catch-22 30 July 2021
Australia's (largely untold) Covid success story 30 May 2020
- September 08, 2021