The absurdity of French leftists 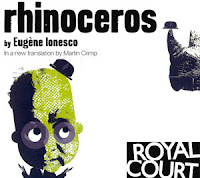 Letter to the Beebs, Re South Korean presentation of Ionesco's "Rhinoceros" in France. [Postscript: read out on 3 August]

I just heard the French fellow (missed his name, but I think he was the Director) talking about the South Korean version of  the absurdist play “Rhinoceros”, which is now on the road in France.  He said “the real enemy now is capitalism” and goes on to praise collectivism.

Perhaps he ought to look at a night-time satellite view of the Korean peninsula to see a vivid display of the difference: black in the North, bright-lights in the South.  North Koreans starve under collectivism, while the South Koreans have the luxury of taking an absurdist play on the road....


Or he could try asking Chinese who lived under collectivism until 1979, when started walking down its own capitalist road. Ask them --  as I did for I lived there at the time -- which they preferred.  “Are you kidding?” they respond, “this capitalism thing is waaaay better!”.  Of course it is: it raised some half billion Chinese out of poverty, the poverty into which they had been plunged by taking the collectivist path.

And yet to a trendy French lefty this capitalist system that has raised more humans in history out of poverty is “the real enemy”.