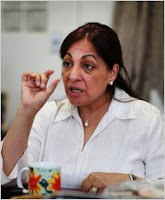 Another article in The New York Times, carried in the local South China Morning Post, about the supremacist mosque on Ground Zero, good because it brings the issue to broader public consciousness, but not so good in the way the article slyly puts critics of Islamism in the frame, implying -- not quite saying -- they are bigots, racists, "Islamophobes".
[above, left, Daisy Khan, wife of imam Rauf, promoter of the ground zero mosque]
Note, for example, the comment "....a movement had begun to spring up against Muslims who want a larger role in American public life." [para 9]  This "movement", if that's what it is, would have no problem with anyone of any race or faith having a larger role in American public life. What it is concerned about is those who hew to an ideology that would destroy American democracy, American values, the very Constitution that allowed them to participate in public life in the first place.  This is most clearly revealed..... [more click below]


“The Ikhwan [the Brotherhood] must understand that their work in America is a kind of grand Jihad in eliminating and destroying the Western civilization from within and ‘sabotaging’ its miserable house by their hands and the hands of the believers so that it is eliminated and God's religion is made victorious over all other religions.”  [ref]

Para 9 also mentions Debbie Almontaser "...a Muslim educator, [who] had been forced to resign as the principalof an Arabic-language public school in Brooklyn after such groups helped paint her a supporting terrorism."  Oh, this is sly.  "Such groups" included none other than the Education Department of New York city and the Mayor, yes, the same Michael Bloomfield, who is now cluelessly supporting the supremacist mosque on Ground Zero as if it were an issue of religious freedom. So, are we to assume that the Department of Education and the good Mayor are part of "such groups", the bigots who want to stop the role of Muslims in American public life?


Anyway, the link to the article is here and I'm copying it below:


1.  Joy Levitt, the executive director of the Jewish Community Centre on Manhattan's Upper West Side,  remembers first talking to Daisy Khan in about 2005, years before Khan's idea for a Muslim community centre in Lower Manhattan morphed into a controversy about September 11, Islam and freedom of religion.
2.  "Strollers," said Levitt, whom Khan had approached for advice on how to build an institution like the Jewish centre - with a swimming pool, art classes and joint projects with other religious groups. Levitt, a rabbi, urged Khan to focus on practical matters, such as a decent hall for weddings and stroller parking.
3.  "You can use all these big words like diversity and pluralism," Levitt recalled telling Khan.
Clearly, the idea that Khan and her partners would one day be accused of building a victory monument to terrorism did not come up - an oversight with consequences.
4.  The organisers built support among some Jewish and Christian groups, and even among some families of 9/11 victims, but did little to engage with likely opponents. More strikingly, they did not seek the  advice of established Muslim organisations experienced in volatile post-9/11 passions and politics.
5.  The organisers - chiefly Khan; her husband, the imam of a mosque in the financial district; and a young real estate investor born in New York - did not hire a public relations firm until after the hostility started in May. They went ahead with their first public presentation of the project - at a community board meeting in Lower Manhattan - two days after an American Muslim, Faisal Shahzad, was arrested for planting a car bomb in Times Square. "It never occurred to us," Khan said. "We have been bridge builders for years."
6.  How Khan's early ideas led to today's combustible debate, one often characterised by powerful emotions and mistaken information, is a combination of arguable naivety, public relations missteps and a national political environment in which perhaps no preparation could have headed off controversy.
7.  As a result, supporters of the US$100 million centre, named Park51, which received its final approval from the city last week, are now starting their fund-raising and detailed planning amid a broader battle. The future of the centre - organisers say it will have a mosque, but its 15 floors will be mainly for other functions - has become grist for talk radio, television and election fights across the US.
Sharif el-Gamal, the developer on the project, said: "This might become the most famous community centre in the world."
8.  Daisy Khan, who immigrated as a teenager, to Jericho, on Long Island, from Kashmir, married Feisal Abdul Rauf, in 1997. They founded an organisation advocating melding Islamic observance with women's rights and modernity. After 9/11 they raised their profile, renaming the group the American Society for Muslim Advancement and focusing on connecting Muslims and wider American society. They criticised religious violence; the imam advised the FBI; his wife joined the board of the 9/11 memorial and museum.
9.  A few years later, el-Gamal asked the imam to perform his wedding.
El-Gamal, agreed in about 2006 to join the effort. Last year, he bought two adjacent buildings on Park Place, where the imam began holding services. Only then did the organisers start to widely discuss their idea.
On top of the fear and confusion in New York about Islam after 9/11, a movement had begun to spring up against Muslims who want a larger role in American public life. In 2007, Debbie Almontaser, a Muslim educator, had been forced to resign as the principal of an Arabic-language public school in Brooklyn after such groups* helped paint her as supporting terrorism. But the centre's organisers said they had little indication they were flying into a storm. [*PF: “such groups” included Mayor Bloomfield, who is now a vocal proponent of the supremacist mosque]
10.  Organisers talked to mayor Michael Bloomberg about the plan in September last year. A New York Times article in December about the project drew little negative comment.
11.  In February, the staff of Scott Stringer, the Manhattan borough president, who liked the idea, suggested the organisers present it to an advisory body that represents the neighbourhood. Planners agreed, but Stringer said nobody warned them of "an Islamic issue".
Before a May 5 community board meeting, some people raised concerns about the feelings of 9/11 victims, but the meeting gave the idea a unanimous yes.
12.  The next day, the uproar began. Some newspapers referred to the project as the "WTC mosque". Faisal Shahzad had been arrested on May 4 in the attempted Times Square bombing. The community board office began receiving "hundreds and hundreds" of angry calls, and  e-mails from around the world, said its chairwoman, Julie Menin - some threatening enough that she requested riot police for the next meeting.
Menin urged Khan and the mayor's office to hold a public forum to clear the air before the next community board meeting on May 25 - to make clear that their congregation had worshipped in the area for years. "It would have defused some of the problems, absolutely," Menin said. But the public forum was not held.
13.  Nevertheless, the project's original backers held firm. When the city's Landmarks Preservation Commission removed the only legal hurdle on August 3, Bloomberg gave a passionate speech assailing the project's critics as trampling religious freedom. American Muslims have rallied to the project's defence.
14.  El-Gamal, angry at constantly having to defend himself in public, refused to appear in a debate on CNN with Rick Lazio, the Republican candidate for governor, who opposes the project. "This is not a debate," el-Gamal said. "I'm an American. I'm a New Yorker. I'm exercising my freedoms in this country."
14.  Yet there is little he would do differently, he said. "There's no textbook that you can follow."
Nor, it seems, a blueprint about what to do next. On Tuesday, organisers met a wider range of 9/11 victim families. Menin wants to stage a town hall meeting. "You have to deal with the uncomfortableness and controversy head on," Menin said.
- August 14, 2010