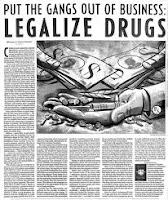 I first came across Jonathan Power some years ago when he wrote a piece about Islam and the supposedly golden era of tolerance during the Ottoman occupation of Spain, the Andelusian "golden era".  I thought it a piece of apologia, either ignorant or disingenuous, in any case, not a fair presentation of the facts.  So, I'd put him in the dhimmi category, or what my old mate would have called the "DC" category, as in Dead and something rhyming with "punts".  (the world divided into the two: the DC's and the Non-DCs, according to Peter P.).
But now Power has come out with an Op-ed piece carried full-page in the local South China Morning Post, favouring the legalisation of drugs....[more click below]
favouring the legalisation of drugs and their control by educational and medical means.   Great stuff.  And echoing the calls by the Mexican president to do the same.  Truly there's some rational progress!
As the "war on drugs" started by Nixon has been a complete and dismal failure.  It shows no signs of ever working.  Everywhere that drugs have been legalised or quasi-legalised and controlled by education and medical means, the use of drugs and drug-crime have dropped.
Important in the push to is the campaign by former and current law-enforcement officers: "Law Enforcement Against Prohibition".  I get their newletters.
Its chairman Jack Cole recently said:

Like most folks, I just sort of fell into things. It was my time, so I joined the Marines, after which I joined the New Jersey State Police where I served for 26 years. I was told to be a narc, so I spent over a decade working undercover. I passively accepted my role in the drug war just as the rest of the country accepted the war itself.

But it didn't last. What I experienced was disillusioning, disturbing. I began to deeply question what I was doing, even as I kept doing it.

Once retired, I acted on my personal questioning and transformation, and along with four other cops, we created Law Enforcement Against Prohibition. Just five of us, encouraged by a few brave allies, giving voice to those who fought on the frontlines and had the best chance to counter the poisonous misinformation and hysteria that fueled the drug war.

I can hardly believe that in less than eight years, LEAP has grown into a professionally staffed, internationally recognized organization with some 30,000 supporters and 100 speakers in 76 countries who have given over 5,000 presentations. It seems impossible, but it wasn't, because of the rapidly disintegrating wall of self-justification that surrounds the drug war, a political sea change LEAP helped to create.