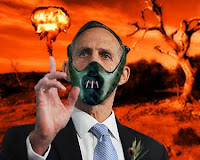 "If you think.... vote Green".  That's the title of an ad -- well, virtually an ad -- which has been done by an Aussie show called Gruen Nation, on Australia's public broadcaster, the ABC.  You can see it on the Green's site, as well as the Greens' policies.  [Postscript: well, well... they've removed the link to the "ad".  Perhaps even the Greens twigged to the fact that it was indeed risible].
For my legions of readers who are uncertain which party to vote for in tomorrow's election... well, don't ask me.  All I can suggest is who not to vote for.  The Greens.  For me they're rather too pink whereas for others they're just not green enough. [hat tip Rosetta Stone photo above left]
Below the jist of an email sent out to a few rellies and friends...
We’ve been having chats around the dinner table here about the election and specifically about the Greens. And most recently I saw the risible Gruen Nation “ad” the Greens have linked to their site.... And wonder, by the way, if anyone has questioned the use of taxpayer money to fund an ABC program that essentially makes a party political advertisement.  Isn’t that covered by some kind of code? In any case, the ad seemed ripe to me for a satirical video mash-up. ("if you think dentistry is important to the future of mankind.... vote Green")

I had a look at some of their policies, and some comments below.... (numbers are Greens Policy documents para numbers).

They want to nationalise “natural monopolies” (7).  Countries such as China, the Soviet Union, North Korea, even the UK, have found that nationalised industries are very inefficient and have higher carbon use per unit of output than private equivalents.  China’s use of CO2 per unit of GNP is far higher than in developed countries and has only been reducing in those industries that have been privatised.  Why would the Greens want to reverse the process, unless they have taken no note of the experience of socialist or communist countries?

The Greens want to increase personal tax to 50% marginal (22) and corporate taxes to 33% (29): these increases would put Australian at the very top of the international tax tables, up there with Zambia, Benin and Pakistan ( “Tax rates around the world”).  Only Japan, in the developed countries has higher taxes, and it’s had dismal economic growth for decades.  Even Scandinavian countries have lower taxes (Sweden 26%, Norway 28% and Denmark 25%).  One doesn’t need to be a George W-Bushian “cut-taxes-for-the-rich” ideologue to note the connection between economic growth, employment and taxes.

Point (8) makes no sense in economics: “....deficits and surpluses must balance each other...”.  In fact surpluses are not something governments should run for any length of time.

The Greens view is summed up in the title they give this: “Genetically Manipulated Organisms”.... (oookayyy...)


This is an ipse dixit statement (just one of many in the policies).  It is a “belief” unsubstantiated by science on the issue, at least that that I’ve read and can understand as a layman (Anna would know more!).  It seems to me to reflect the Greens distaste for science in general.

Given Australia’s distinguished record in many areas of research, including in areas that were not then called, but today we would call "genetic modification", such a radically anti GM view is shameful and wrong.


“... there is a strong link between the mining and export of uranium and nuclear weapons proliferation” (1) .

This is simply false. Australia exports uranium under a variety of multilateral and bilateral safeguards agreements and regimes, which are verifiable. This false assertion means the second assertion, dependent on the first, is also false:


“... the consequences of the use of nuclear weapons, or of catastrophic accidents at, or terrorist attacks on, nuclear power stations, are so great that the risks are unacceptably high.” (2)

Well, ok, the consequences of nuclear weapons use would be catastrophic indeed, but the connection to the export of uranium is false as in point 1.  And the risk of accidents or of terrorist acts against nuclear stations are way overblown.  (I have visited the Chinese nuclear plant which is on our doorstep and seen the anti-terrorist measures they have; they’re the same the world over, as all 400+ are controlled by the same regime of safeguards; there are many other ways terrorists will attack, other than at bunker-like nuclear power stations; flying into building, or bombing the Tube, for example....).

This assertion would be correct, in its entirety, and scientifically provably so, if we removed the word “not”.

Given that the Greens are basically a one-issue party (the clue’s in the name), I was expecting some real heft in this section, but no.  It’s a farrago of “driving”, “addressing”, “increasing”, “reforming”, and so forth, in large measure “creating” various government entities, including a new ministerial position (I thought one existed already?...), and trying to get the international community to take emissions abatement measures (that didn’t’ work so well last time round at Copenhagen). Not even an Emissions Trading Scheme??! (not that the ETS, as it’s worked in Europe, is a panacea).  Certainly nothing I read that had any real vision or practical CO2-reducing measures, other that “setting targets”.  Of course, having (falsely) deemed nuclear out of the equation, they’re not left with much, except renewables such as wind and water; not even new HEP is allowed...  Hope is not a policy.

Overall, I’ll sum up the Greens as follows: luddite communists; anti-growth nationalisers; pusillanimous (strangely!) on climate change.  Their anti-science luddism is evident throughout: while they throw money at all sorts of regulatory bodies, they won’t fund, for example, carbon-reduction at existing coal stations (CCE 39) or molecular biology (aka “manipulated” science). It’s clear to see where their policies will reduce employment: higher taxes, closing mining and GM industries, nationalising industries.  It’s not clear where they will increase employment, except in government regulatory bodies and those involved in multilateral affairs (great for Canberra!).  And all in the name of Climate Change, on which they are (remarkably) cautious and without ideas.

As for their policies on same-sex marriage and dentistry inclusion in Medicare: no worries!