That Mosque just won't go away.... 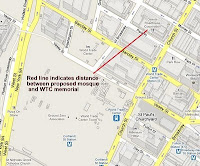 Well, you know, I got it wrong.  I thought that once it had its planning permissions, there'd be a bit more huffery and puffery from the anti jihad watching crowd, then the builders of this so-called "Ground Zero Mosque" would get on with it and we'd "move on".   But no, the issue has picked up a head of steam and consumed air and band width galore in the last few days.  (Though I'll bet it dies down in a day or two...)
BTW: there's been a lot of talk of just where it is and if it really is on Ground Zero.  It's two blocks north, about 600ft.  [Map above left, hat tip to Unambiguously Ambidextrous]
Australia's ABC had a report from their Washington correspondent which put the furore down to the politicians.  But it was much more an issue that came from the ground up, principally from the blogging and bus-advertising of Pamela Geller and Robert Spencer.
Maureen Dowd writes in the New York Times, suspicious enough in itself, but she's always worth reading, if sometimes loopy.  I've even got her book on the Bush years (ooooooh remember them??).  In this piece, she adds to my mental collection of phrases that begin with "the terrorists have won if.....[insert your favourite issue that grinds your gears here]" and which has had everything inserted in it, since Condy Rice said "the terrorists have won if we stop shopping".  Dowdie's addition: "the terrorists have won if we don't allow a mosque to be built near ground zero".  Of course, the opponents say the same thing, save with the removal of the word "not" after "do".
She then says "The war against the terrorists is not a war against Islam".  Well, it is, like it or not, but I don't have time to go into that here.  The terrorists are motivated by Islam in their attacks on the west; they have declared war, even if the west refuses to acknowledge it (I know: you can't say that you're at war with Islam as a politician, for many reasons;  but there's no need to say the opposite, which is patently false).
She says that imam Rauf is "the moderate Muslim we been pining for".  Rubbish.
I'm not the only one who thought her piece was beamed in from another planet, slapdash and full of errors, apologist to boot. Noel Sheppard at Newsbusters, for example, takes apart her "typically errant banter".  On the other hand, Glynnis MacNicol at Mediaite rather likes her and says the column is "packed from start to stop with MoDo-esque zingers, all of them worthwhile".  In case you're wondering: Sheppard and I are correct and MacNicol is wrong.  Just to clarify that.
That ol' nazi feelin'
The comparisons to Nazism got a good workout again.
From Keith Olbermann, who trotted out the "first they came for the Communists..." speech by Pastor Martin Niemoller, thereby making the link between the critics of the mosque and nazis.  This is the "the Muslims are the new Jews" moral equivalence, which is complete rubbish, as I noted here, and Dan Gainor notes here. It's one of those myths, like "both the Bible and the Koran have their violent verses".
BTW: I used to rather like Olbermann, but he's flecked with spittle in this one, and rather vile.
And mosque critic Newt Gingrich said that building the mosque there would be like "putting a nazi sign next to the Holocaust Museum". This might have not been the best analogy.  But if you compare Olbermann and Gingrich's analogies,  the Newtster's holds more water.  The comparison between Nazism and Islam does indeed bear close and detailed scrutiny, as I might have written somewhere, but am too lazy to reference right now.  And wasn't it W Bush -- Dowd's new "go-to"guy -- that talked of "Islamofascism" at one time?
Finally, there's Jon Stewart, who makes fun of the whole thing (of course, and in his charming way), with some moral equivalence between Baptists who kill abortionists or Catholics pedophilia and the violence of Islam.  They're just the same, aren't they?  Well, no.  Or, yes, technically yes they are in the same sense that pickpockets and serial killers are just the same: they're both criminals, aren't they?  How much more fun it would be if Stewart would find comedy in the very absurdity of the moral equivalence.  "I mean it's not just islamic radicals, it's those baptist abortionist killers, why they must be in the -- what? -- single figures by now!?"