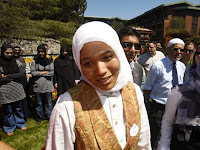 Well, no, they're not saying that.  She was employed, after all, by Disney.  She asked them "several months ago" if she could wear the hijab and only decided to wear it, in defiance, when Ramadan started recently.  So clearly it had nothing to do with her Moroccan-ness, her Arab-ness or her Muslim-ness.  It had simply to do with a dress code, which is clearly stated by Disney.  Note that they even bent over backwards; they did not say she could not wear the hijab, just that if she did, she would need to work in a back-of-house area.  This is combination Muslim victimhood with doing one's own small part to promote the spread Islam and Islamic practices....
[Postscript: update story here]