"The Steady Erosion of Women's Rights in Egypt: A Photographic Story" 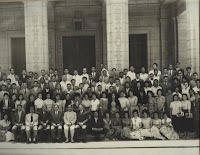 Aha!
I've been looking for this, on and off, since I first saw it some time ago, and have just come across it again. Check out the photos of the graduating class of Cairo University, from 1959 to 2004.  (1959 at left).


These photos, sent by my good friend Tareq Heggy, speak volumes about the politicization of the Islamic Veil. In the 1950s, Cairo University graduates were not veiled. By the twenty first century, the veiling of educated women was fully underway.

Link to the photos and some interesting comments.