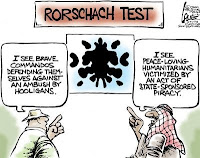 This is not only gormless equivalence of the world's first recognised genocide with accidental killings on a ship; it's also plain wrong.
While the Turks have done everything to avoid even discussion of the genocide of Armenians, and most assuredly have not apologised, the Israelis have apologised for the deaths on the flotilla.  Moreover, the latest response of Israel to the Goldstone Report on Operation Cast Lead included commitments to redraft its ethics code and appoint officers for “humanitarian” issues to accompany to every battalion.
What is it about  people like Macshane, is it ignorance or just lazyness?  Or perhaps disingenuousness,  Whichever it is, none reflects well on him.  For there is no moral equivalence.  And Israel's response to the Gaza flotilla killings is easily found with a few mouse clicks.
Note, too, how Macshane casually dismisses the concerns of around 75% of Europeans.  Turkish accession to Europe would lead to free migration to the current EU.  This he dismisses as simply a “specter”.  80 million Muslims, 100 million by 2030 is simply a "specter"….
Article below:
Stop the Blame Game
Europe and Turkey need each other
July 23, 2010
In the cold war years Turkey was unquestionably accepted as the West’s most important frontier nation. Now it seems to prefer coddling Iran over backing the U.N. Security Council’s harder line against Tehran. Disputes with Israel, once a key friend of Turkey, have become so bad, there is almost a rupture between the only two democracies in the region. Turkey has abolished visas for Syrians despite the well-documented support Damascus offers terrorist outfits. Inside Turkey, there are fears the ruling Islamist AK Party wants to see the Muslim nation replace secularism with religious politics.
Policymakers everywhere are looking for someone to blame for the apparent shift in Ankara’s direction. Last month U.S. Defense Secretary Robert Gates pointed his finger at European politicians who reject Turkey. Pro-Israeli lobbyists say the AK’s Islamist influence has unleashed a hate campaign against Israel. Greek and Cypriot diasporas highlight Turkey’s refusal to make amends for its 1974 invasion and occupation of the northern half of Cyprus. Inside Turkey, the struggle between the Muslim and secularist traditions have yet to be resolved.
The truth is, everyone bears responsibility. The U.S. has no effective policy for Turkey. George W. Bush failed to engage the Turkish political class, which subsequently refused his demand that the U.S. Army use Turkey as a transit route for its invasion of Iraq. Washington later scolded Turkey for its diplomatic opening to Iran, even though Ankara viewed it as little different from earlier European efforts to engage with Tehran or Obama’s policy of reaching out to American adversaries. Europeans, including Germany’s Chancellor Angela Merkel and France’s President Nicolas Sarkozy, have delivered a condescending message that only drives Ankara away from Europe. Turkey can have anything it wishes from Europe, they seem to say, except what Ankara wants: a realistic negotiating path to EU membership.
Turkey is also to blame. Its leaders operate by a double standard. They expect and largely receive understanding and cover for their harsh line against Kurdish separatists, but expect Israel to parley with Hamas, which is dedicated to the elimination of the Jewish state. Turks, genuinely shocked by this summer’s killing of nine civilians on an aid flotilla to Gaza by Israeli soldiers, demanded an apology from Israel, a nation that does not express remorse any more than Turkey does for the massacres of Armenians.
The way forward is to try to reignite efforts to bring Turkey into the EU. This won’t be easy. Ankara’s friends in Europe are dwindling in number. Europe’s new politics of identity nationalism is openly anti-Muslim. Across Europe, politicians wave the specter of 80 million poor Muslims flooding into Europe if Turkey were to join the EU. Britain, with no Turkish immigrants and the EU’s member state farthest from Turkey, likes to portray itself as Ankara’s best friend in Europe, under both the previous Labour government and the newly elected prime minister, David Cameron. But for internal political reasons, Cameron has walked out of the main center-right political grouping in the EU and formed a small marginal alliance with ultranationalist and Euro-skeptic political parties. As a result, Britain is absent from the debate. Today the most active supporters of Turkey’s EU aspirations are social democrats, who are in opposition.
Still, efforts at restarting the accession process are crucial, and not just for Turkey. At a recent Istanbul conference organized by London’s Royal Institute of International Affairs, Turkey’s Europe minister, Egemen Bagis, described the EU as “the greatest peace project in the history of mankind.” Such language is rarely heard from the lips of EU foreign ministers, who have become disillusioned with the problems of managing a cantankerous Europe unable to generate growth. Turkey’s energy and strong economic performance would make it the EU’s sixth-biggest economy. The streets of Istanbul on both its European and Asian sides are thronged with an energetic, young, modernist population that pays lip service to Islam but is aching to shape a 21st-century Turkey more like Spain than Syria or Saudi Arabia. Brussels, Ankara, and Washington should encourage that, not point fingers at one another for Turkey’s drift in the opposite direction.
MacShane is a Labour M.P. and served as Britain’s Europe minister.
- August 03, 2010