"Too laid-back about immigration" 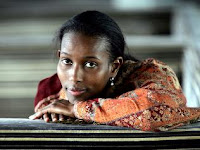 The wonderful Ayaan Hirsi Ali lets go with both barrels in The Australian, on August 7. [photo left, courtesy The Australian]
She says what I've been on about for some time: that it's not an issue of immigration.  That it's an issue of Islam and values.
The myth is that Muslims are facing the same difficulties and discrimination that previous waves did: those from Italy, Greece, India, Vietnam, China and that just as these groups faced and overcame these difficulties and integrated into and contribute to Australian society, so too will the Muslims in due course.  So, nothing to worry about folks, just part of the argy-bargy of life.
Not so, of course.
Muslims are taught -- it's in the doctrine -- that Islam is superior and Muslims should keep themselves separate from the kuffars, the unbelievers, or those who believe wrongly (Christians and Jews).  In years past they may not have hewed to this requirement too closely, but the second and third generations are caught up in the resurgence of Islamism and the new immigrants are already there, mentally.  This is shown by the experience of the Turkish immigrants in Germany, reported by Caldwell in his "Reflections on the Revolution in Europe", which is hugely worth the read.  Especially by Australians, as Australia does not yet face the challenge of Europe.  (Though it's getting there).
She also points to something I notice as I read the Australian press: that there's discussion of immigration, but not of Muslim immigration.  That seems to be a no-no; but it's the key issue really.
As she says:


"... it will be less easy to assimilate immigrants whose culture is not only different but who may actually reject the Australian way of life."

Given the bipartisan commitment to "the Australian way of life" (something we may find hard to define, but we know what it is), you'd think that something that threatens it would be worth of some debate.
The article is copy/pasted below and is also here.
A related article from the New York Times here.
Culturally imcompatible Muslims could threaten Australian society and value


Update: dopey article in response by the reliable dhimmi Sally Neighbour in The Australian, Aug 14
- August 12, 2010