"There's no conflict with the U.S. Constitution in Shariah law." Really? 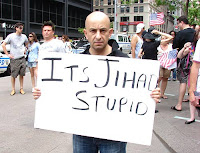 That's what Camie Ayash, a spokeswoman for the Islamic Center of Murfreesboro, said in yesterday's New York Times article "Across Nation, Mosque Projects Meet Opposition".  "There's no conflict with the U.S. Constitution in Shariah law."

But that's just not true.  Here's the key difference, the fundamental difference, the overriding difference between them:  The US Constitution says laws are made by people; Sharia law says laws are made by Allah.  The Constitution stands on the principle from the  Declaration of Independence: that governments "derive their just powers fromt the consent of the governed".  In Sharia, people are slaves to Allah (to whom they must "submit", Islam itself meaning "submission") and all laws are based on Allah's word as contained in the Koran.
That seems like a pretty big difference to me.  Law of Man vs Law of God.  Law of Reason vs Law of Faith.
The article contains another myth, a common one I've found amongst my mates and acquaintances:  namely that all immigrant groups in the past have faced some difficulties and discrimination and so do Muslims, the latest wave.  They'll be find in due course, just like all the others.
For example Dr Masoor Mirza: "Every new group coming to this country -- Jews, Catholics, Irish, Germans, Japanese -- has gone through this," Dr Mirza said.  "Now I think it's our turn to pay the price, and eventually we will be coming out of this, too."
Actually no that's not true either.  None of those immigrant groups came with an ideology that is supremacist, homophobic, misogynist, sectarian, anti-semitic, judophobic, and bent on world domination (yes, it is!).  All of these groups sought to partake of the host culture; and all were indeed eventually absorbed into its rich fabric.  But not so Muslims, because (i) they don't want to integrate themselves, for they're told it's not Islamic to try to do so and (ii) they believe that all other religions and political systems should be subservient to Islam.
But the very fact the the New York Times is now carrying on its front page reports of public concerns about mosque building in the US is progress, as people come to understanding of the Islamist threat.  The article's author takes a rather superior tone, but not as sneering as it might have been some time ago.  For facts have got in the way of the arrogant dismissal by the Left of these well-founded concerns.
Meanwhile, the always-worth-reading Raymond Ibrahim may be right when he sees a silver lining in the Ground Zero mosque: that more people will read about, and understand Islam and the threat of Islamism.
That's certainly my case.  Post 9/11 George W. Bush said that Islam was a "religion of peace", and I thought I had to find out what this religion was all about, and why it was that a religion of peace motivated 19 hijackers to kill themselves and thousands of others.  So I found out.   And conclude that
"Islam is unique in having a developed doctrine, theology and legal system that mandates war against unbelievers" (Spencer, 2006).
The NYT article quotes Ihsan Babgy, professor of Islamic Studies at University of Kentucky: "... it's different when you say these mosques are going to be nurturing terrorist bombers, that Islam is invading, that civilization is being undermined by Muslims", clearly with the intent to discredit such views;  but more and more people will study Islam and find that these conclusions are spot on the money.
- August 10, 2010