*That* mosque: there's the "right" to build it, for sure; but they shouldn't

When Obama made the speech supporting the building of the Ground Zero Mosque (GZM -- that's the building on the left that's going to be torn down to make way for it), he said they had the "right" to build there, just as any religion had the right to build where zoning allowed.  He framed the issue in terms of freedom of religion, as did Mayor Bloomberg.  Opponents said: the issue's not about "rights" or freedom of religion, we don't dispute those rights; what we're concerned about is the sensitivity, or lack thereof, of building it there.  Pamela Geller's sign on the buses said it all: "Why There?".  As Laura Ingram, speaking to George Stephanopoulos, said:


".....600 feet from where thousands of our fellow Americans were incinerated in the name of political Islam?  And we're supposed to be considered intolerant if we're not cheering this?"

Obama belatedly realised this (or belatedly was made to acknowledge something he possibly knew all along....), in a subsequent partial backpedal from the previous support. 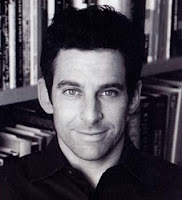 Sam Harris
It's like Hugo Rifkind said about the burka: they have the "right" to wear it; but they shouldn't; because it's rude.
A couple of other commentators opposed the mosque in the last few days and they are significant for being "of the left": Sam Harris and Douglas Murray.  They wrote blogs on a left-ist blog, The Daily Beast.  That's significant for many of the points each made have long been made by the Jihadwatching community and who have often, and all-too-quickly, been labelled as right-wing/republican/conservative/takeyourpick nutters, and hence safe to ignore.
As so often, Ross Douthat impresses (well, me at least), with his take on it.  He takes the issue above -- there's the "right" to build; but they should not) and winds it around the theme of Two Americas.  His article is here and I've posted it in full below.

There’s an America where it doesn’t matter what language you speak, what god you worship, or how deep your New World roots run. An America where allegiance to the Constitution trumps ethnic differences, language barriers and religious divides. An America where the newest arrival to our shores is no less American than the ever-so-great granddaughter of the Pilgrims.
But there’s another America as well, one that understands itself as a distinctive culture, rather than just a set of political propositions. This America speaks English, not Spanish or Chinese or Arabic. It looks back to a particular religious heritage: Protestantism originally, and then a Judeo-Christian consensus that accommodated Jews and Catholics as well. It draws its social norms from the mores of the Anglo-Saxon diaspora — and it expects new arrivals to assimilate themselves to these norms, and quickly.
These two understandings of America, one constitutional and one cultural, have been in tension throughout our history. And they’re in tension again this summer, in the controversy over the Islamic mosque and cultural center scheduled to go up two blocks from ground zero.
The first America, not surprisingly, views the project as the consummate expression of our nation’s high ideals. “This is America,” President Obama intoned last week, “and our commitment to religious freedom must be unshakeable.” The construction of the mosque, Mayor Michael Bloomberg told New Yorkers, is as important a test of the principle of religious freedom “as we may see in our lifetimes.”
The second America begs to differ. It sees the project as an affront to the memory of 9/11, and a sign of disrespect for the values of a country where Islam has only recently become part of the public consciousness. And beneath these concerns lurks the darker suspicion that Islam in any form may be incompatible with the American way of life.
This is typical of how these debates usually play out. The first America tends to make the finer-sounding speeches, and the second America often strikes cruder, more xenophobic notes. The first America welcomed the poor, the tired, the huddled masses; the second America demanded that they change their names and drop their native languages, and often threw up hurdles to stop them coming altogether. The first America celebrated religious liberty; the second America persecuted Mormons and discriminated against Catholics.
But both understandings of this country have real wisdom to offer, and both have been necessary to the American experiment’s success. During the great waves of 19th-century immigration, the insistence that new arrivals adapt to Anglo-Saxon culture — and the threat of discrimination if they didn’t — was crucial to their swift assimilation. The post-1920s immigration restrictions were draconian in many ways, but they created time for persistent ethnic divisions to melt into a general unhyphenated Americanism.
The same was true in religion. The steady pressure to conform to American norms, exerted through fair means and foul, eventually persuaded the Mormons to abandon polygamy, smoothing their assimilation into the American mainstream. Nativist concerns about Catholicism’s illiberal tendencies inspired American Catholics to prod their church toward a recognition of the virtues of democracy, making it possible for generations of immigrants to feel unambiguously Catholic and American.
So it is today with Islam. The first America is correct to insist on Muslims’ absolute right to build and worship where they wish. But the second America is right to press for something more from Muslim Americans — particularly from figures like Feisal Abdul Rauf, the imam behind the mosque — than simple protestations of good faith.
Too often, American Muslim institutions have turned out to be entangled with ideas and groups that most Americans rightly consider beyond the pale. Too often, American Muslim leaders strike ambiguous notes when asked to disassociate themselves completely from illiberal causes.
By global standards, Rauf may be the model of a “moderate Muslim.” But global standards and American standards are different. For Muslim Americans to integrate fully into our national life, they’ll need leaders who don’t describe America as “an accessory to the crime” of 9/11 (as Rauf did shortly after the 2001 attacks), or duck questions about whether groups like Hamas count as terrorist organizations (as Rauf did in a radio interview in June). And they’ll need leaders whose antennas are sensitive enough to recognize that the quest for inter-religious dialogue is ill served by throwing up a high-profile mosque two blocks from the site of a mass murder committed in the name of Islam.
They’ll need leaders, in other words, who understand that while the ideals of the first America protect the e pluribus, it’s the demands the second America makes of new arrivals that help create the unum.
- August 17, 2010