Friedman, Kristof and Dowd, STILL on about the "GZM" 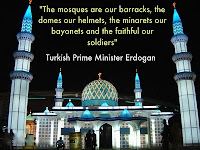 "GZM" = the Ground Zero Mosque, though, to be fair to the apologists, it really is not on GZ, but about two blocks north.
[at left, quotation of a Turkish poet, by Turkish PM Erdogan]

I thought the furore would have died down by now, but no, still on the boil, with no less than the NYT Trinity weighing in, taking up both op-ed pages yesterday.
They deserve a longer critique, but for now I'm in a rush and this is just to make sure I get them "filed".
Quick comments are:

Maureen Dowd in Mad in Herds talks of people being more prone to believe in the "Wondrously False", than in the "Wondrously True".  I wonder if she has considered that she may be prone herself to the "Wondrously False" notion that Islam is a "Religion of Peace"?  There is no indication that she has read the core documents of the ideology of Islam.
Nicholas Kristof in Taking Bin Laden's Side takes a big quaff of the moral equivalence beverage when he notes that an "honor killing" in Pakistan was by a Christian.  Oooookay then.  That's the same sort of argument that would suggest that both a pickpocket and a serial killer are the same, for aren't they both criminals?  The statistics on honour killings are that they are about 95% Muslim.  Similarly virtually all terrorism now is Islamic.  95+% of terrorist groups are Islamic, and so it goes.
Interesting, btw, that while Kristof adds to the litany of "the terrorists win if....." collection, because he says that the mosque would be a symbol of "moderate" Islam, which bin Laden would be incensed by, Raymond Ibrahim reports that the Al-Azhar university in Cairo, the preeminent university in Sunni Islam, doesn't want the mosque built because it would connect (so they think) Islam with 9/11, in other words violent acts with Islam.  Bayumi, the Al-Azhar scholar against the mosque is hardly a moderate himself, so we have two wings of Sunni Islam coming out against the mosque: one, we are assured by Kristof, because it's too "moderate" and the other, Bayumi, for the opposite reason, because it reminds of Islamic violence.  Oh well, as the promoters have said, it was not meant to be easy...
Thomas Friedman in Surprise, Surprise, Surprise yearns for a leader who will surprise "on the upside", as Mandela did when he was released from jail.  A nice way for this to happen would be for the imam Rauf, to say that he's taken note of the more than 60% of Americans who don't want the mosque to be built there, and to say that he'll move it, and focus it on the Intra-Islam battles (rather than inter-faith), for he needs to convince others in Islam, not non-Muslims, about the need for the peace he says he aims for.  That would surprise on the upside.
Friedman also says that the main battle is intra-Islam.  That's true to an extent.  The same as it was true that in pre-49 China, the battle was between Chinese, the Nationalists and the Communists.  But once Mao won, the battle joined was the one to extend communism to the rest of the world.  Sure, China got sidetracked by the Cultural Revolution, but the aim was there, as it was with the Soviets.  In the case of Sunni vs Shia or Sunni vs Sunni, once those battles are sorted, the task becomes the spread of the caliphate, for that's the requirement of Allah and the "prophet"..
- August 24, 2010