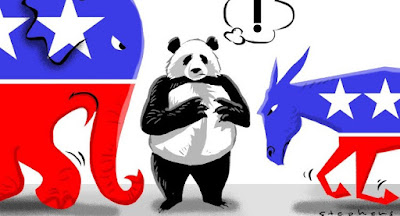 This is David Shambaugh of George Washington U saying that if China hopes for softer treatment from the US if the Dems win the House next week, Beijing had better think again because the current anti-China stance is bipartisan.  (Don't count on a Democratic Congress to soften Trump on China).  And that feeling has been growing since well before Trump.
I don't know about that, but will give Shambaugh's view some weight since he's right there in the centre of the capital.
I don't know Shambaugh, but some of the commenters do and seem to think he's a bit of an anti-China blowhard.
As usual for the Post the comments are vitriolically anti-American. Viciously so sometimes. I suspect that some commenters are Beijing stooges. We know that Beijing deploys an army of actual real people to police the internet within China, to influence discussion boards or shut them down. Why wouldn't they have some goons doing the same to the premier English language daily in Asia?
So I'd rather give a bit more weight to the article and treat the comments with a slab of salt.
Snip:


It is very unlikely that the election outcome will appreciably change the hardline China policy. The reason is because there now exists a quite strong bipartisan consensus for pursuing a toughened China policy.