This happens again and again. The Left has some dopey policy or other. They'll claim a high moral ground and excoriate anyone daring to question their view. Then there will be some awakening, because: mugged by reality. Then they will adopt the policy of their opponents, but with no acknowledgement and no apology.
So now. Here's Hill!
Hillary Clinton has shocked the Left with some truths. Truths that have been known and pointed out by more centre oriented folk for some time. And which have been taken over by the dreaded alt-right because the centre and centre Left ignored them.
The issue: immigration.
She rightly (finally!) identifies unrestricted immigration into Europe for resulting in far right parties in Europe and for the Brexit vote.
Mrs. Clinton said that while the decision of some nations to welcome migrants was admirable, it had opened the door to political turmoil, the rise of the right and Britain's decision to withdraw from the European Union.
"I think Europe needs to get a handle on migration because that is what lit the flame," Mrs. Clinton said in the interview with The Guardian, which was conducted before the United States midterm elections this month.
"I admire the very generous and compassionate approaches that were taken particularly by leaders like Angela Merkel, but I think it is fair to say Europe has done its part, and must send a very clear message — 'we are not going to be able to continue provide refuge and support' — because if we don't deal with the migration issue it will continue to roil the body politic," she said.
And yet, the Left still pushes back. It wasn't concern at immigration but austerity. Oh yeah?
Here's a professor, being either a knave or a fool. Trying to mislead or simply being ignorant:
Tanja Bueltmann, a history professor at Northumbria University in Britain who focuses on migration issues, said Mrs. Clinton's perspective was "tragically misjudged."
"Ultimately, immigration is not actually the problem that inflamed voters: Much more foundational issues, such as austerity, are the real reason," Professor Bueltmann said. "Immigrants and refugees are simply the scapegoats populists have chosen to use to drive forward their ideas."
A simple google search gives YouGov results: 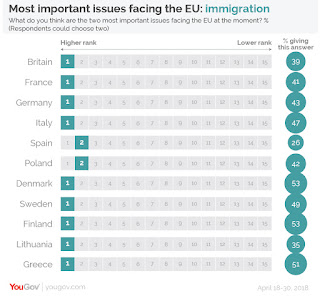 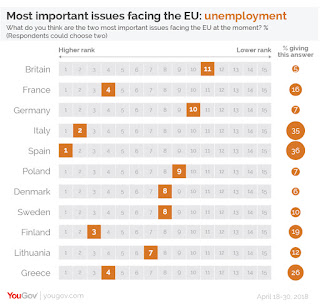 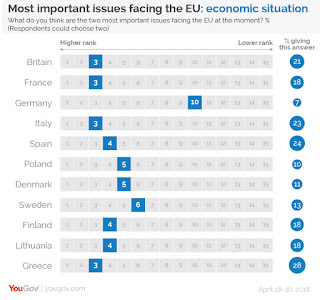 Summary: Hillary has not "tragically misjudged". She is spot on.
The number one concern for Europeans is Immigration. Immigration. In nine of eleven European countries its the number one concern.  And in the other two, it's the number two concern.
"Austerity" doesn't even figure. Unemployment and the Economic situation, proxies perhaps for austerity, are way down the list.
So, in complete refutation to professor Bueltmann, the single most important issue for European (and of course British) voters is immigration. Not only is it not "not actually the problem that inflamed voters".  It is the issue that inflamed voters.
So.
But the Left will think and say that to take these concerns into account is "populism" a term they've managed to make pejorative.
And so the Left will take some time to catch up even with the slothful Hillary.

********
Mrs. Clinton, in an interview with The Guardian, argued that migration policies contributed to the rise in right-wing populism in Europe.