“Trump has tapped into American disdain for China’s authoritarianism” | SCMP 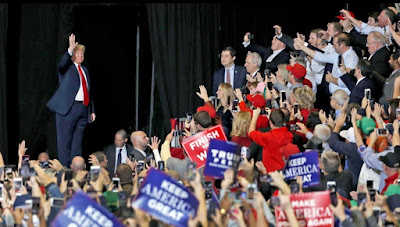 I was going to write something about David Dodwell's recent article about how China and America were both serial trade offenders and so Trump's attacks on China are a case of pot and kettle. Tu Quoque. I was going to say that, sure, both are at fault, but China’s faults are bigger and worse. A serial killer and a shoplifter are both criminals. Right....
But as so often my sloth comes to assist, as I.M. Wright of Happy Valley has done the heavy lifting for me in the letter to the editor, copied below the fold.
Another case of the wisdom of Taoist Wu Wei philosophy. ("do nothing").
The letter:

Columnist David Dodwell is correct when he writes of "hypocrisy run amok" (November 3) on trade. The US and China are the two largest trading nations so we should not be surprised that their positions carry the most hypocrisy.

However I think that Mr Dodwell, as a veteran trade negotiator, is so preoccupied with trade that he is not seeing the wood for the trees. Trade and the economy are not the be all and end all, and rather than "inching towards openness", China's social reforms and market forces seem to have stalled, despite much official rhetoric to the contrary.

US presidents Clinton and Obama expected freedom within China to progress alongside wealth creation. They were naive, as the two differing cultures will not mesh easily. As China gets stronger it naturally becomes more nationalistic, but it also is becoming revisionist. US business leaders will bend low to scoop up profits, but ordinary Americans have long detested authoritarianism, and President Trump has tapped into this aversion.

The US attitude to China now appears to be "belt up" and "hit the road". I think your Insight articles "Don't count on a Democratic Congress to soften Trump on China" (November 2) and "Malaysia and Pakistan offer lessons on the Belt and Road Initiative" (November 3) give a more realistic analysis than Mr Dodwell's piece.

"Trump has tapped into American disdain for China's authoritarianism"