The Sleep of Reason produces monsters 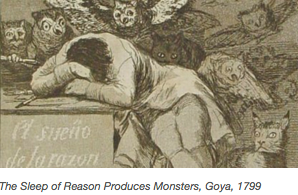 I wrote the other day about the harassing of professor Roger Scruton. And how he was being pilloried for statements that are demonstrably true.  Truth is no defence in today's Europe.  See the recent European Court of Human Rights (sic!), which found that statements calling Muhammad a paedophile were a "crime", because they "hurt the feelings" of Muslims.  Not that the statements were false (they aren't), but that they upset the delicate sensitivities of our Muslim co-residents.
And so now with professor Scruton, he gets the Leftist treatement.
The good, the sound Melanie Phillips, tells it hard here, below the fold also.
If there is one event that most clearly encapsulates the vicious and socially suicidal ignorance and cultural sectarianism currently rampant in British society, it is the treatment that has been meted out to Sir Roger Scruton.

Sir Roger is arguably the most important British philosopher of recent years and one of the most significant in the western world. He has devoted his life and work to advancing the causes of reason, understanding and decency.
As a professor of aesthetics, a lover of the countryside and a noted champion of English traditions, he was recently appointed by the government to lead a new commission concerned with building “beautiful” homes.
Cue immediate denunciation of Sir Roger for thought crimes: Islamophobia, homophobia, sexism, antisemitism, the lot!
As reported here he has said, for example: “It is the long centuries of Christian dominance in Europe which laid the foundations of national loyalty, as a loyalty above those of faith and family, and on which a secular jurisdiction and an order of citizenship can be founded.”
By contrast, he said, countries where Islam was the dominant faith were often a failure even if, like Pakistan, they functioned as a state. [PF: Christopher Hitchens says "Pakistan isn't even a country, it's barely a state..." @ 3'30"]
In 2007, he wrote about gay adoption: “Every now and then we wake up to the fact that, although homosexuality has been normalised, it is not normal. Our acceptance of the homosexual lifestyle, of same-sex couples, and of the gay scene has not eliminated our sense that these are alternatives to something, and that it is the other thing that is normal.”
In 2005 he said there was no such crime as date rape and that sexual harassment “just means sexual advances made by the unattractive”.
Now, you may agree or disagree with his views. But surely he is entitled to state them? Especially since millions believe many of them are true or remain western norms?
Not so for Labour MPs who have demanded he be removed from his new post. According to Andrew Gwynne, the shadow communities secretary: ‘Nobody holding those views has a place in modern democracy”.
This of course is the way the enemies of the west have set out to undermine and destroy its core precepts — by demonising opinions that are legitimate or true, and spinning the cultural centre of gravity so that it has turned into its negation.
As Sir Roger wrote on his own website: “The orthodox liberal view is that homosexuality is innate and guiltless. Like the Islamists, the advocates of this view have invented a phobia with which to denounce their opponents… In a society devoted to ‘inclusion’, the only ‘phobia’ permitted is that of which Conservatives are the target.”
And now he himself is the target.
But it’s the charge against him of antisemitism that has provided the most spectacular demonstration of the way words are twisted to mean their opposite in order to smear someone who stands for the defence of core western values.
According to the Red Roar site, Buzz Feed and other tormentors, Sir Roger said in a speech: “ Many of the Budapest intelligentsia are Jewish, and form part of the extensive networks around the Soros Empire”. Cue claims of antisemitism.
But here’s the whole passage from which those words have been taken:
“Many of the Budapest intelligentsia are Jewish, and form part of the extensive networks around the Soros Empire. People in these networks include many who are rightly suspicious of nationalism, regard nationalism as the major cause of the tragedy of Central Europe in the 20th century, and do not distinguish nationalism from the kind of national loyalty that I have defended in this talk. Moreover, as the world knows, indigenous antisemitism still plays a part in Hungarian society and politics, and presents an obstacle to the emergence of a shared national loyalty among ethnic Hungarians and Jews.”
Sir Roger was actually explaining how nationalism came wrongly to be regarded as toxic by the architects of the European project and why Jews share that suspicion. Far from promoting antisemitism, Sir Roger was actually speaking against it. By radically decontextualising his words, his accusers reversed their meaning.
And as for George Soros, who deserves opprobrium for the huge number of socially disruptive and anti-western causes he is funding, the now widely bruited conceit that any such criticism is antisemitic simply because he is a Jew would be laughable were it not so outrageous and sinister.
This chilling episode, like so many others of a similar nature, is reminiscent of the character assassination and social mind-control perfected by Soviet communism. As it happens, for many years Sir Roger championed, helped and breathed resistance into political dissidents in the former Soviet Union.
Now he himself is being targeted by those willing to hijack truth and reason to destroy their political opponents. Many of them don’t even realise that’s what they’re doing. And this isn’t the Soviet Union. It is Britain
- November 09, 2018