Trump Is Right About Nationalism | WSJ 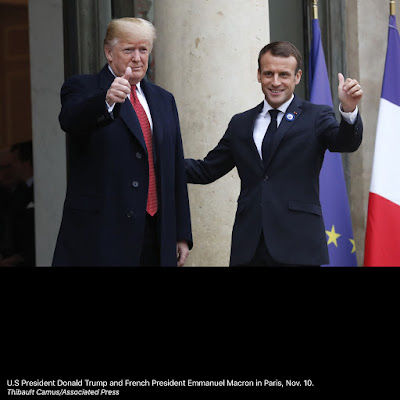 I was going to write about the "nationalism" brouhaha and may as well do so on the back if this article in the WSJ. It's Marco Rubio, but that alone doesn't make it wrong. The first several paras seem spot on.
When Trump first used the term in one of his midterm rallies, I wondered if it was wise. So I looked it up both on Google and Dictionary. In both, the first definition is that it's a synonym for patriotism. A synonym. Not the opposite, as Macron claimed on Armistice day in Paris. Other definitions include the desire to have ones own independent nation, like Scottish nationalism or Kurdish nationalism. Surely those are nationalisms we all support.
Only one definition is the nasty one alluded to by Macron. But that's always prefaced by "far right".
No such nuance for Macron. He just went ahead and elided all the meanings into one nasty one, just so he could trash Trump... at a remembrance ceremony.
Hence the twitter tirade from Trump. Not that that's wise, necessarily, but then it's Trump after all. Trump Is Right About Nationalism
- November 14, 2018