All conspiracy theories are the same. Not.

Take a look at the letter below and my comments on it after.
Leaning on Conspiracy Theories
Roger Cohen’s “The captive Arab mind” (Globalist, Dec. 21) was both superficial and misleading. Yes, an increasing number of people lean on conspiracy theories to explain certain complex events, but they’re not exclusively Arabs, nor are their theories always wrong or completely unfounded.
The fact is Arabs have been subject to Western intervention and they have been victims of many conspiracies in recent memory.
Mr. Cohen chooses to blame it all on an Arab world “gripped by illusion.” It’s not an illusion that Israel invaded Lebanon on more than one occasion, occupied large parts of its territories for many years, recruited many informers, instigated sectarian violence, oversaw massacres and assassinated Lebanese leaders.
It’s also not an illusion that the United States adopted a number of unpopular, undemocratic clients in the region.
Should it surprise us that Israel is recruiting moles in Lebanon? That Israel or the U.S. planted viruses in Iranian computer networks? That they carry out assassinations? Leak false information?
I would have been surprised if they didn’t do all the above — and much more. After all, they have been at war for decades in a complex region, fighting in a terribly unfriendly environment.
Mr. Cohen may argue that there is no “greater force” in control of the world, but for the Arabs there is a “greater” American-Israeli force controlling or attempting to control their world.
Mr. Cohen speaks of a “captive Arab mind” but neglects to see how conspiracy theories are ripe and spread in America — about the dangers of Arab Muslims wanting to change America’s way of life; about how they hate America for its freedom and liberty; about how they seek to control the world through a future Islamic caliphate; about how Arabs continue to seek Israel’s destruction even when they offer it full recognition and peace in exchange for withdrawal from the occupied territories.
Could you blame certain Palestinians for leaning on conspiracy to understand their misery when every other declassified document shows Israeli strategy is to dispossess them and cover it up?
Marwan Bishara, Doha, Qatar
Conspiracy theories?  I’ve put the quotes from this letter in “blue italics” below, my comment following the quote.
First quote:
“…about the dangers of Arab Muslims wanting to change America’s way of life;...”
The Muslim Brotherhood in the US is clear about wanting to change America’s way of life. The MB is Egyptian in origin and very active, in the US and the west generally (also in Australia).   This is their aim, from their 1991 manifesto:
The process of settlement is a "Civilization-Jihadist Process" with all the word means. The Ikhwan [Muslim Brotherhood] must understand that their work in America is a kind of grand Jihad in eliminating and destroying the Western civilization from within and "sabotaging" its miserable house by their hands and the hands of the believers so that it is eliminated and God's religion is made victorious over all other religions. Without this level of understanding, we are not up to this challenge and have not prepared ourselves for Jihad yet. It is a Muslim's destiny to perform Jihad and work wherever he is and wherever he lands until the final hour comes, and there is no escape from that destiny except for those who chose to slack. But, would the slackers and the Mujahedeen be equal. [Source].  (My emphasis)
Second quote:
“…about how they hate America for its freedom and liberty;…”
See above First Quote re the Brotherhood: the aim to destroy “Western civilization from within” must include the destruction of America’s freedom and liberty.
Also note the frequent signs seen at Muslim–dominated demonstrations, “Freedom go to Hell”. 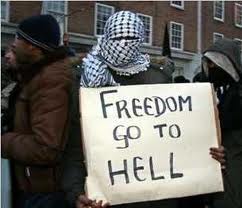 The same sign has been seen at many different Muslim demos
indicating some form of Islamist "talking point" --
seems to say something about what these Islamists
think about democracy and freedom, doesn't it?
There’s also the words of Osama bin Laden (a Saudi Arab):
…in bin Laden’s  essay (a “letter”) of May 2002, directed at Saudi sheiks (that is, for Islamic-eyes only), titled “Moderate Islam is a Prostration to the West”, bin Laden says:
On freedom, liberty and the West’s way of life:
“For practically everything valued by the immoral West is condemned under Sharia law.” (The Al Qaeda Reader, p.37)
On coexistence:
“Does Islam or does it not, force people by the power of the sword to submit to its authority corporeally if not spiritually?  Yes.  There are only three choices in Islam; either willing submission; or payment of the jizya [tax on non-Muslims]…; or the sword – for it is not right to let the infidel live.  The matter is summed up for every person alive: Either submit, or live under the suzerainty of Islam; or die”.  (p.42)
In case we miss the point:
“In fact, Muslims are obligated to raid the lands of the infidels, occupy them and exchange their systems of governance for an Islamic system, barring any practice that contradicts the Sharia from being publicly voiced among the people…”. (p.51)
[Source]
Bin Laden is a student of Hassan al-Banna and Sayyid Qutb, the founders of the Muslim Brotherhood.  The Brotherhood operates in the US via the Council on American Islamic Relations, the Islamic Society of North America and the Muslim Students Association, amongst others.
Third quote:
“…about how they seek to control the world through a future Islamic caliphate;…”
See above, the Muslim Brotherhood statements.  There’s debate in the Muslim world as to whether a caliphate can rule the entire world or if it needs to be divvied up between Sultans ruling bits of the whole.  But there’s no doubt that it’s an aim of orthodox Islam and explicitly so amongst the more active Islamic organisations, eg:
Hizb ut-Tahrir, Jamaat-e-Islami, al-Ikhwan al-Muslimoon and al-Qaeda all have, as a fundamental aim: the establishment of a global dictatorship under the rule of one Caliph, an autocrat who will impose one interpretation of the Shar’iah over the entire globe. [One Caliph to Rule Them All, Rashad Ali, 2009].
Fourth quote:
“…about how Arabs continue to seek Israel’s destruction,…”
Not just Arabs: Ahmadinajad has put the Persians firmly behind the destruction of Israel as well.  Immediately around Israel, there’s Hamas, Hezbollah, Fattah (from time to time), Iraq (from time to time), who are all for the crushing and destruction of Israel.  And, in the case of Hamas, for the killing of all Jews not just in Israel, or the Middle East, but in the whole world.

Conclusion:
It is surely not paranoid “conspiracy theory” to take these people at their word – since they have made it clear that they are very serious indeed about carrying out their perceived Islamic duties – and that they do indeed hate America and the West for its freedoms and aim to overthrow their despised democratic governments.


So, I would argue that not all “conspiracy theories” are the same.  There is no moral equivalence between believing that 911 was the work of Jews and the belief that there is a strong strain of Islam out to destroy western civilization, and to rule the world in an Islamic calipahate.  This may seem perfervid.  But it’s not, for it’s there in plain sight, written in plain English, stated clearly in placards.
- December 28, 2010