City of discontent: views on the Hong Kong disturbances 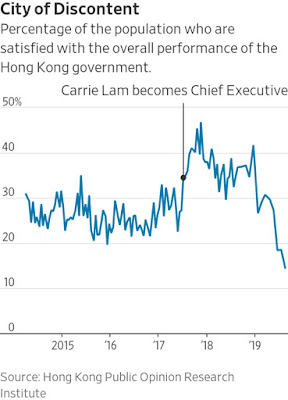 The commenters here in Hong Kong are coalescing into "the sky is falling" camp and "the sky is clearing" camp.

As Mao said: 一分为二 one divides into two…

In the "sky is falling" camp, the long time journalist and TV host Michael Chugani.
/Snip

Hong Kong is sliding from a free society into an authoritarian one. A combination of events last week became the tipping point. In a wave of Friday arrests, police swooped on democracy activists, including lawmakers and Joshua Wong Chi-fung. A day earlier, police grabbed independence campaigner Andy Chan Ho-tin at the airport. [here]

Lam's decision to withdraw the bill could mark a turning point. It is the first time she has granted any of the protesters' five demands. Even last week, as the troubles escalated, Lam was refusing to give in. [here]

There are  more views on each side and the best place to see them is the South China Morning Post (which has no paywall). It's really very sound and quite neutral.
The international press, the Wall Street Journal and New York Times and their ilk, are still in the simplistic "brave protesters defying a brutal dictatorship" mode (eg, their shameful running of Joshua Wong in the front page the other day). And even if some of the protesters are indeed motivated by these ideals, many are not, as we know for many it's a bit of a wheeze. When else can you go out with your mates, cause a bit of mayhem and go home in time for mum's Yum Cha…

As for me, well, I tend in the "sky is falling" camp. Just have a look at the chart above of public perceptions. The precipitous decline… I do wish I could have some faith in Beijing's acting with good faith. But I've seen too much of their other side. The cruel, the brutish, the inflexible, the ignorance of what makes a free and open society tick. And for the most recent several Chief Executives, they've made themselves too willing to preemptively kowtow to what they perceive to be Beijing's wishes.
As for J, I believe she's more in the "sky is clearing" camp.
I'm hoping she and Buddle are correct, and not me.
The print version of the Buddle piece is "Hang on to hope" and that's just what we're all doing.