“Trump is a complete dickhead. Discuss” 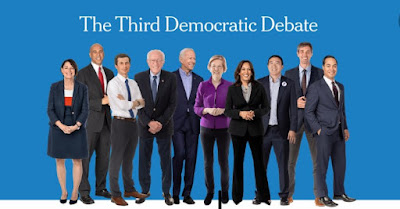 I’m watching now. The ABC panel is not at all biased. Not at all.
The tenor of the questions:

And all of them together: “we’re going to cancel student debt, and medical debt and credit card debt and climate debt and, and....ALL debt”.
A debt cancellation party.

The CNN panel afterwards thought it was all rather good.  Great ideas, great policies, clearly elucidated and robustly debated.
To me it was softballs, bromide and boilerplate.  I wasn’t impressed... until CNN told me I should be.
- September 13, 2019