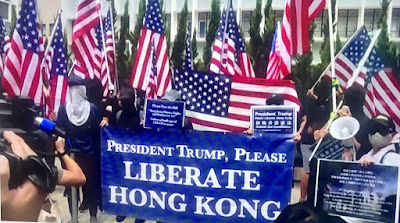 18:02 hrs: now they’re smashing the windows of the Central MTR metro station. For what purpose except blind rage I cannot see. There are no arrests from these allegedly violent police…

EARLIER: These are going on at Lower Albert Rd, Garden Rd and Chater Gardens in Central. They are in the thousands rather than tens of thousands. American flags everywhere. I gotta wonder at the tactics there. America to intervene? You’re dreamin’. More Pelosi interventions? What friggin use is that? It’s pathetic, shameful and humiliating.

Who paid for the flags? They were available at various “pick up points”.
May be NGOs. We know they’re involved in training. Like the Oslo Freedom Forum
And now they’re playing the Star Spangled Banner again. Weird.
14:54hrs.  The chants are now “Fight for freedom. Liberate Hong Kong”. Hong Kong has: freedom of religion, freedom of conscience, freedom of the media, freedom of the internet, freedom of movement, freedom of trade and free trade. These are now imperilled by the demos.
They’re also chanting anti police. There were wild, and untrue, rumours that the police had liked and hidden 6 protesters. Though nothing in it, just adds to the anti police vibes.
Meantime:
The US flag-wavers do not represent the majority of Hongkongers who participate in the protests. Indeed, any substantive interview with any of the flag-bearers discloses the animosity they receive from fellow protesters. After all, how can they support self-determination if they are calling on a foreign power to help them determine their future
... Accusations that the “black hand” of the US has played a role in propping up the protests are not new, and were the subject of at least one pro-establishment march as early as June. The day after around two million and took to the streets, China Daily, in turn, took to Twitter to tell the world about protests against American interference.
...Asking the US to enact this legislation because it could possibly help at the moment does not restore sovereignty to Hong Kong, but merely transfers it elsewhere. It is for these reasons we should not call for this kind of direct action from Washington.
- September 08, 2019