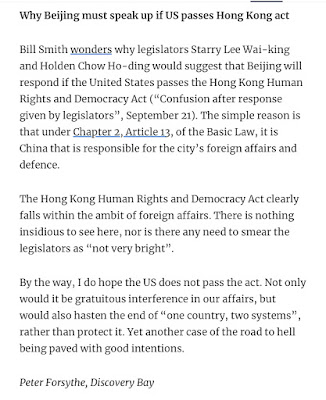 My letter is published in today’s South China Morning Post.
Link and scroll down.

ADDED: I’ve just watched our Chief Executive Carrie Lam’s latest presser which was followed by police showing a video of protesters violently beating a police officer on the ground at the airport. I went to look for the video, googled “demonstrators beat police officer” and instead got the opposite, police handling, sometimes mishandling, demonstrators. That’s not because there are more cases of that, because in our watching it’s not; the police are always reacting to violent acts not instigating them. So there’s an algorithm choosing one side over the other. Without getting too conspiratorial ‘n all… and without even mentioning g Fake News…
- September 24, 2019