The many and varied reasons for the protests 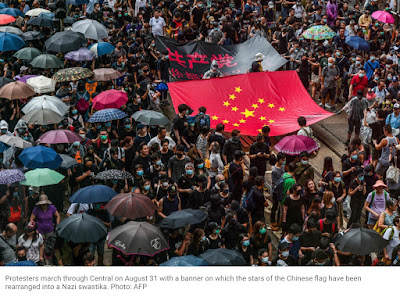 We’ve seen so many reasons put up to explain these 100+ days of protest in Hong Kong that I thought I’d summarise them here and update as needed:

Independence for Hong Kong. This is the most dangerous of the demands and simultaneously the least likely to be achieved (likelihood = zero), and most likely to get up Beijing’s nose. Pushed by the likes of Joshua Wong and ProgressUST. [here]

An ill-fated extradition bill has ignited a prairie fire, fuelled by housing unaffordability, lack of upward mobility, widening inequalities, and social injustice. Looking deeper, the anger has much to do with a perceived erosion of identity, lack of youth empowerment, and hopelessness about the future. [here]

The tragedy is that the current protests are fundamentally protests against China, fuelled by Hong Kong’s inherent (and ironic) hatred of China, a hatred borne of both fear and envy, and whipped into a wildfire by the international media that does not want to see, nor understand, the root cause. [here]

By my count at fourteen reasons to account for the firestorms raging in Hong Kong.

So, what is it? One of the above? All of the above?  Some of the above?  My guess is, that it’s a combination of the 5D (though most protesters don’t know them all), combined with a hatred of things Chinese and some living issues: housing prices, etc...
All of these are fixable, though the universal suffrage one is tricky.  And there are a myriad ideas out there how to fix. I don’t know, save that both the government and the protesters have to get down to some talking, rather than intransigence from the government and vandalising by the protesters.

ADDED: There’s also the theory that it’s all being pushed by the CIA, via its National Endowment for Democracy.  Maybe. Beijing certainly thinks so, and I know close friends who believe so. I’ve yet to see evidence, and I wonder what the benefit to the US is of turmoil in HK, though of course there’s the bigger issue on the US-China trade war and Hong Kong is simply a pawn. At the same time, people are arguing that it’s in Beijing’s interest to have the turmoil (Zweig 24 Oct), to show people in China:  “see what democracy does for you: chaos!”  It can’t be both in Washington and in Beijing’s interest to have turmoil in Hong Kong. What, win-win for vandalism?