Alex Lo says today that "one country two systems" is a failed political experiment. I don't know. Surely as a model for Taiwan reunification it has indeed failed. But as an experiment to keep Hong Kong essentially the way it was, a free capitalist system sitting next to a very different social, political and legal system, it's worked, at least for twenty years since 1997.
Think of the counter-factual. What could have been Beijing's position? It could have simply said Hong Kong will return to China and we will handle it like any other city in China. Britain could have done little to counter that. It was Deng Xiaoping who came up with the imaginative solution of "one country, two systems". (一国两制).
It is not Beijing which is imperilling this unique formula. It's the demonstrators, for all their good intent (stretching there to be the most charitable).
I've mentioned Alex Lo before. He's pretty good in Hong Kong issues, though I've had differences with his views several times in the past. Lately he's very sound. (I reckon). He's far from a pro-government or pro-Beijing stooge.
"Stooges" used to be called "running dogs" (走狗) by the Chinese communists, back in the Cultural Revolution. As in "capitalist running dogs" (资产阶级走狗). Lately, the protesters have been calling their mainland Chinese "Chi-na men". As in 支那人, which is even more insulting than running dogs, as it's the term used by imperial Japan for Chinese, in the thirties. As mentioned by Alex. And by me in an earlier post in the protesters' graffiti.
Here's a clear example. “Locusts” are “支那人” which means mainland Chinese, but using the Imperial Japanese term, “Zhi-na ren). Is there anything more insulting? More bigoted? More, dare I say it, racist?? 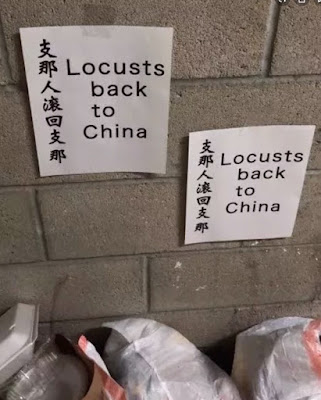 These are the sentiments of the followers of Joshua Wong, as carried on the front page of the New York Times yesterday. I wrote a letter to the Times in response. I doubt they'll print it, but gets it off my chest.

"One country, two systems" is 一国两制 in Chinese. On the Facebook page of the splittists ProgressUST, that I wrote about yesterday, is this below.
Translation: "Only with two countries can there be two systems". The "two countries" of course referring to China and Hong Kong. Perhaps a bit more felicitously: "Two systems means two countries".
Either way, the sentiment is clear. And is …
Red Rag to the Beijing Bull… 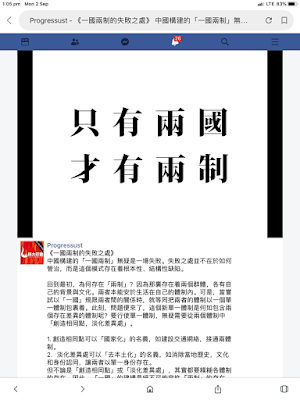