Jeremy Corbyn says the the UK should have no billionaires. Dig a bit and it gets more alarming. Corbyn finds any wealth distasteful (his acolytes gush: “he rides a bike and has an allotment!"), and in power he and his self-described Marxist Chancellor John McDonnell will do their best to wipe out any wealth. For the sake of the poor, of course. Not at all for envy. And with “wealth” defined by them.


[PS: here’s a compilation of John McDonnell -- shadow Chancellor! -- saying repeatedly how he would like to punch, slap or jail people who don’t think precisely the way he does, and supporting violence and insurrection of all stripes]

Beware. The UK is headed for penury if Corbyn, McDonnell and the rest of their gang get into power. I saw it in the UK back in the seventies when I was there -- it led to the Three-Day Week -- and in China in 1976, when I lived as a student, and had ration tickets for food and clothing.  That’s what socialism does to you, never mind Marxism...
Income inequality according to the Labour party has become a “crisis".  But look at the chart above. The Gini index, a widely accepted measure of inequality, has gone down. Down = “good". That is inequality has declined, not become worse. (The above is for income, but wealth follows the same trend). Britain ranks in the 20% “best” countries in the world according to the index.
And yet the Labour party, that is to say, the Left, is stoking resentment and hatred for “worsening income and wealth inequality”.  Of course we know why they are doing this.  They want to gain electorally. But it remains the fact that in so doing they are stoking the increased division and bitterness in society.
In America the same is happening among the Democrat presidential candidates. All decry inequality.  But they don’t take account of income transfers. Transfers TO the poor in the form of various subsidies and direct hand-outs, and Transfers FROM the richest, in the form of taxes.
This is shown in the chart below, by economists Phil Gramm and John Early.
The candidates only talk big income differences (60 to 1) without including transfers and call that a “moral crisis”. But the difference between the poorest and the richest is 3.8 times after transfers, not 60 times.
Moreover, if more money is transferred to the middle quintiles (ie, the middle classes), then they would find it no longer worthwhile to work, as they already are only just above the net income of the poorest as it is, after accounting for transfers 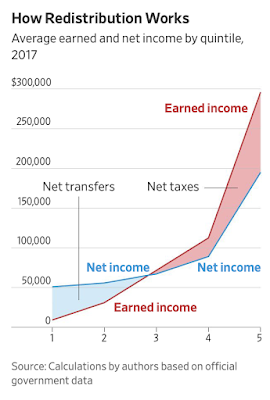 Gramm and Early note in conclusion:

Any debate about further redistribution of income needs to be tethered to these facts. America already redistributes enough income to compress the income difference between the top and bottom quintiles from 60 to 1 in earned income down to 3.8 to 1 in income received. If 3.8 to 1 is too large an income differential, those who favor more redistribution need to explain to the bottom 60% of income-earning households why they should keep working when they could get almost as much from riding in the wagon as they get now from pulling it.