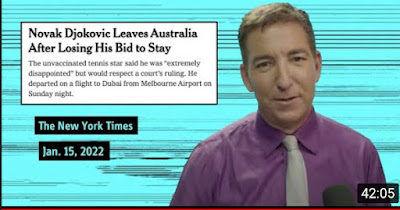 I’ve covered this a few times because it’s more than an anti-vax tennis champ being kicked out of Australia. It’s a story of deception, hubris, politics, schadenfreude.

One deception is of all the stories out there that Djokovic tried to enter Australia on false grounds, either without a visa, or that he lied in his visa application. Neither is true. And is in any case irrelevant to the ultimate reason the government gave for deporting him.

Djokovic had a visa issued by the Australian government after he was granted an exemption from vaccine -- by two Australian Medical Boards, as prescribed in the laws of our country --  because he had had Covid within the prescribed time, and so had natural immunity.

The other deception is the Australian government. They gave him a visa. Then kicked him out. Basis bogus reasoning, the hubris of “the law is the law” until “the law isn’t the law, coz we don’t like it”.  Basis deceit, basic hubris and basic schadenfreude from those who want Djoko to suffer just as much as the rest of Australians have done, by blaming him, and not the government that led them to that suffering. Shame on ScoMo. Shame on the media who praise this authoritarian and deceptive ploy. Shame.

Greenwald is a left-wing human rights lawyer who broke the Edward Snowden papers. His voice takes a bit of getting used to. Over time I’ve come to appreciate his integrity. He hews to the truth as closest he can get to it. His intro to the vid above:

Note that the Australian government, in deporting Djokovic, did not contend that he posed a threat to the public health due to a risk of transmitting COVID. The opposite is true: the government acknowledged that he qualified for a legal exemption from the vaccine requirement to enter the country given that he just contracted COVID as reflected by a December 16 positive test, followed by a negative test on December 22, and therefore has high levels of natural immunity. That is why he received a legal visa to enter Australia despite being unvaccinated. The proffered justification from Immigration Minister Alex Hawke, who cancelled his visa and ordered him deported, was that Djokovic’s statements in April, 2020 implied that he was skeptical of vaccines, and the presence of someone in Australia who is viewed as an “icon” of personal choice would foster social disruption and “excite” anti-vaccine sentiments.

In other words, the principle just embraced by the Australian government and upheld by its judicial system (whose hands were largely tied due to the virtually absolute power vested in the government) is that anyone who has ever expressed any skepticism over vaccines in general, or the COVID vaccine in particular, can and should be denied entrance to the country and be prevented from pursuing their livelihood — even though the government admits they pose no threat to the public health by transmitting the virus to others. Immigration lawyers and civil liberties activists in the country are warning of the grave dangers posed to everyone from this precedent