The hell of ‘Zero Covid’ 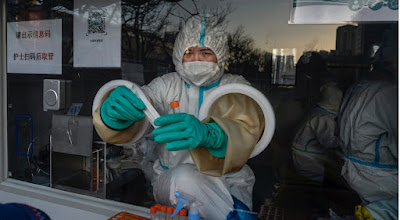 A story not seen in our local Hong Kong media. Just some
Imagine a nation in such a state of distress that its citizens were reduced to bartering for food. A nation where women were so desperate for something to cook and eat that they started swapping sanitary towels for vegetables. A nation where families were so hungry that they would trade their cigarettes for a cabbage. This country actually exists. And it isn't one of the poor, sometimes famished nations of the global South. It's China. More accurately, it's China under the policy of 'Zero Covid'. If you want to witness the hell of Zero Covid, the dystopian derangement of subordinating every facet of life to the crusade against coronavirus, look no further than the country where this virus first emerged.
The bartering for grub and other basic supplies is taking place in the city of Xi'an in north-west China right now. There has been a spike in community Covid infections in Xi'an and the authorities have responded with ferocious authoritarianism. Thirteen million people have been confined to their homes since 23 December. Initially they were allowed out once every two days to buy food, but even that infinitesimal scrap of liberty was done away with on 27 December. Since then, the people of Xi'an have been under literal house arrest. They are not permitted to leave their place of residence for any reason, not even to buy food. Yes, for the past nine days 13million people have been locked in their own homes; if they take so much as a step outside, they risk arrest.
To get around the rather important matter that people will become gravely ill if they don't have food, officialdom in Xi'an has arranged to deliver essentials to people's front doors. Not surprisingly, this hasn't gone entirely smoothly. Residents have complained about not receiving enough to eat. Others say they have received no aid at all. Citizens have taken to Weibo to share images and videos of themselves bartering for foodstuffs. In one clip, a desperate man offers a Nintendo console for some instant noodles and steamed buns. Another offers dishwashing liquid for apples. People 'no longer have enough food to eat', one Xi'an resident told Radio Free Asia. Another said Xi'an has witnessed a 'return to primitive society'.
It isn’t only Xi’an that is suffering under the boot of Zero Covid. This week, the 1.2million residents of the city of Yuzhou in the Henan province have been locked down following the discovery of three Covid infections. And asymptomatic infections at that. The rules are severe. All public transport has been suspended. Driving has been banned. All schools, shops and leisure venues have been closed. Mercifully, unlike the arrested citizens of Xi’an, residents of Yuzhou are allowed to go out to shops that provide ‘the supply of daily life materials’. That is, they’re permitted to buy food. And that’s all. Under Zero Covid you are allowed to eat and nothing else. You may sustain your body but every other human pursuit – education, association, leisure, work, protest – is denied to you. Everything is ruthlessly subordinated to public health. Life is denuded of all the things that make it worth living; only corporeal preservation is permitted.
And woe betide citizens of China who agitate against the tyranny of Zero Covid. In a creepy echo of the Mao era, public shaming has made a comeback. A few days ago footage emerged of police in the city of Jingxi in southern China parading alleged Covid criminals through the streets. Four people in hazmat suits and face masks were marched by cops through an area of the city as others looked on. All four had placards hanging from their necks displaying their names and photographs of their faces. Their alleged offence was to help people cross the border into China – the gravest offence in a Zero Covid country. The aim of this Maoist spectacle of public-health shaming, in the words of CNN, was to raise awareness about ‘border-related crimes’ and encourage ‘public compliance with epidemic prevention and control measures’. Maybe going outside to partake in a Two Minutes Hate against Covid criminals will soon be permitted in Xi’an? Any species of relief from the nine dark days they’ve been locked in their homes would no doubt be welcomed.
More …
ADDED: SCMP hasn’t ignored the Xi’an lockdown story. Just reported it in slightly less breathless prose: 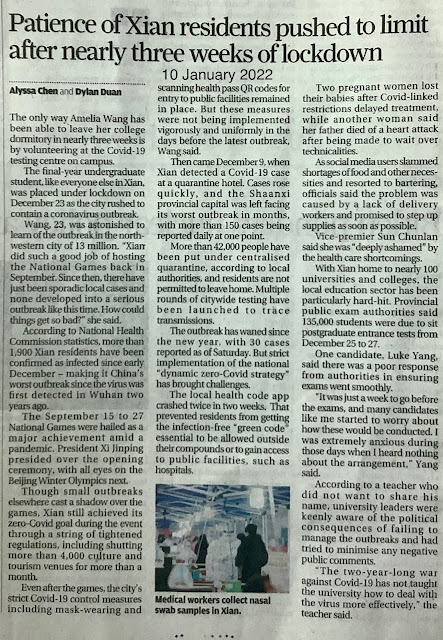